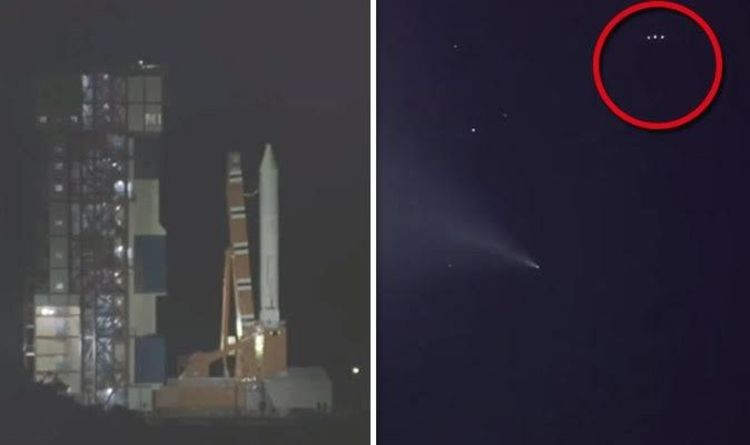 
Those were the shock claims made after video of the apparently unknown object passing the Epsilon 3 rocket launch was uploaded to YouTube by conspiracy theory channel UFO Today.

The rocket was sending a £255 million satellite – which will monitor the Earth’s atmosphere – from Kyushu Island in Japan into orbit.

UFO Today speculated that a “mysterious craft” passed by the rocket as it flew at 25,000mph and it could mean that aliens are monitoring our activity in space.

Thousands watched the Japanese Space agency Jaxa launch the rocket at 6.06am local time on January 18.

But, the video of the alleged UFO has just surfaced.

In the footage uploaded by UFO Today, after the rocket engaged its secondary boosters, the object, allegedly at the same altitude, appears.

The object has three white lights and a red flashing one as it appears to near the rocket, which means it could just be a plane.

However, UFO Today suggested a no-fly zone was in place during the launch.

In a promotional blurb for the video the channel said: “Many will say this is an aeroplane, but the area had a no fly zone at the time of the rocket launch.

“The launch went perfectly, but during the launch a strange mysterious craft was filmed. This UFO was flying at the same altitude as the rocket.

“It was moving along with the rocket as it started it’s orbit around earth. What was this object?”

Sceptics have laughed this off and said it was nothing more than a plane.

One unimpressed viewer wrote: “It’s got an FAA light blinking… so …it’s human made.”

Scott Brando runs debunking website Ufoofinterest.org and said it was probable it was just a plane.

he even produced an image to show how the lights of a plane would create the effect seen in the video if it were out of focus.