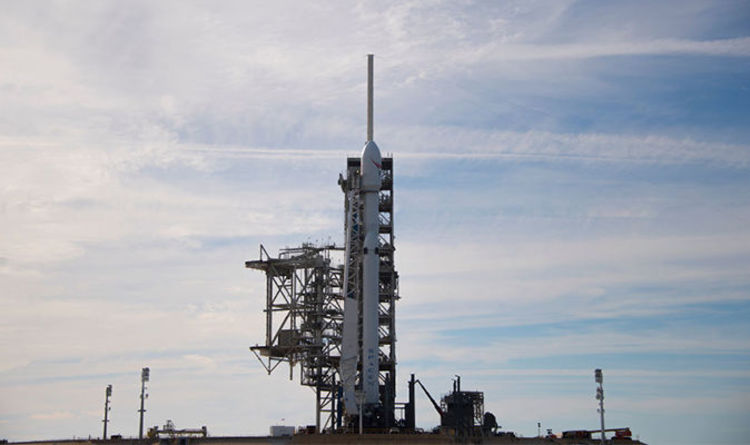 
SpaceX will send the world’s first car into orbit around Mars as the Falcon Heavy rocket takes off in Florida.

The Falcon 9-based spacecraft maiden launch will make history this evening becoming the most powerful rocket to leave Earth since NASA’s Atlas 5.

The rocket was due to take off in January but was pushed back several days to today from the Kennedy Space Centre.

SpaceX wrote on Instagram: “The first test flight of Falcon Heavy is targeted for Tuesday, February 6th at 1:30 PM ET from Launch Complex 39A at Kennedy Space Center in Florida.

“For this test flight, Falcon Heavy’s side cores are flight-proven—both previously supported independent Falcon 9 missions in 2016.”

The Falcon Heavy will carry a “cherry Tesla Roadster” to orbit Mars, playing David Bowie’s ‘Space Oddity’ on repeat. The firm said it would “be in deep space for a billion years or so if it doesn’t blow up on ascent”.

Mr Musk revealed his plan in December when he posted a series of images on Instagram of the red Tesla inside the Falcon Heavy.

He also wrote: “Test flights of new rockets usually contain mass simulators in the form of concrete or steel blocks.

Record-Breaking Experiment Could Solve a Huge Challenge in Quantum Computing
Water Can Spontaneously Form Hydrogen Peroxide, And We Finally Understand Why
‘Structured Water’ Is Not What People Claim. Don’t Believe The Hype, Scientist Says
Extreme Drought in Italy Reveals Hidden Bomb Submerged in River Since WWII
An Experimental Surgical Robot Is Headed to The International Space Station