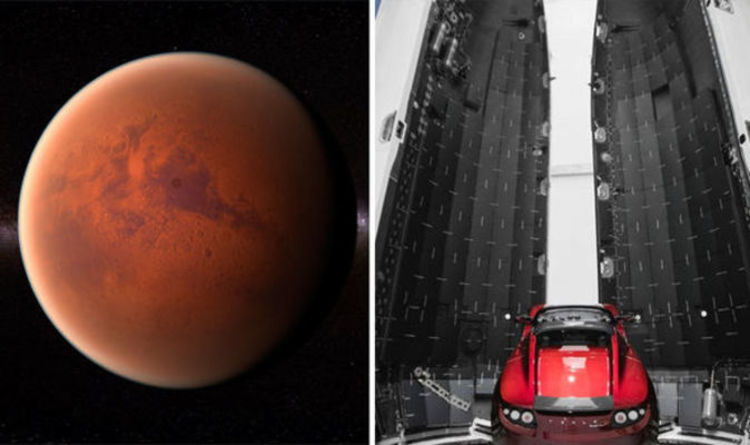 
Launching at 18.30GMT (13.30 local time) from the Kennedy Space Center in Florida, SpaceX will fire up its heaviest and most powerful rocket to date.

Rather than carrying a customers’ payload, the Falcon Heavy will carry a “cherry Tesla Roadster” to orbit Mars, playing David Bowie’s ‘Space Oddity’ on repeat. The firm said it would “be in deep space for a billion years or so if it doesn’t blow up on ascent”.

In December, SpaceX chief Elon Musk posted a series of pictures on Instagram of the red Tesla Roadster inside the Falcon Heavy.

Mr Musk posted an image of a dummy in a SpaceX space suit, alongside the caption “Starman in Red Roadster”.

The rocket has 2,500 tons of thrust, equal to 18 Boeing 747 aircraft at full throttle and is twice as powerful as the world’s next most powerful rocket.

The Falcon Heavy will be capable of carrying up to 140,000 pounds of cargo and if the flight today is successful, once the rocket is in space, it will release the car which will orbit the sun for eternity.

“I would consider even that a win, to be honest.”

An Experimental Surgical Robot Is Headed to The International Space Station
This Artificial Synapse Can Run a Million Times Faster Than Ones in The Human Brain : ScienceAlert
This Seemingly Simple Foot Feature May’ve Allowed Sauropods to Become Giants : ScienceAlert
Clinical Trial Restored Sight to 20 People With Corneas Made From An Unlikely Source : ScienceAlert
Minor Google Meltdown Exposes The World’s Utter Reliance on a Single Tech Company