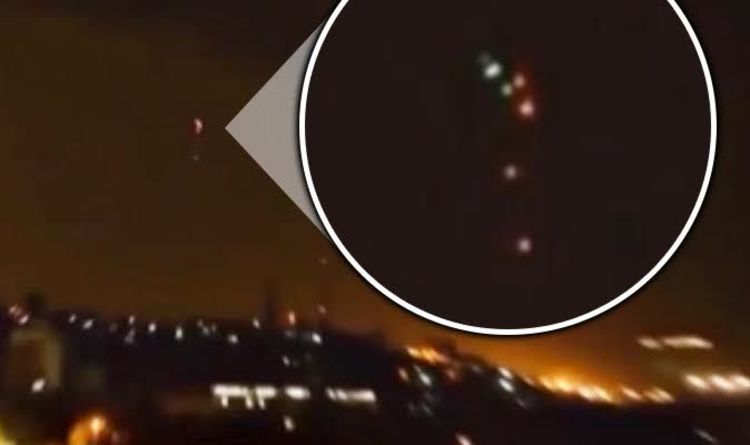 
Then, one by one, the lights drop towards the ground as the so-called object above remains stationary.

It is said to have been filmed in the skies above a city in Ukraine.

Blake Cousins from the channel said: “Whatever it is, it is spitting out UFOs.”

His brother Brett, who helps run the channel, added: “Something huge is up in the sky.

“It is stationary, it’s not like a typical flair run of military aircraft.

“These are stationary and dropping multiple objects – it’s amazing.”

Blake then rules out parachutists as being the cause, saying: “This is no aerial display that I’ve seen before.

“This is maybe the best footage I’ve ever seen.”

Around 20,000 people have already watched the clip online, Dailystar.co.uk reports.

One viewer posted on YouTube: “That is unreal, what the hell is that?”

Another added: “I never thought I would say this but that is an alien ship.”

But a third was more sceptical, writing: “Large group of Chinese lanterns.”

Scott Brando who runs debunking website Ufoofinterest.org said: “Those lights are not parachuters but military cluster flares during a usual military drill filmed several times in those skies.”He provided a link to a YouTube video showing a similar operation.He later tweeted: “This cluster of lights suddenly appeared in the sky above the village of Novogradska in south-western #Ukraine are not #UFOs but were targets (parachuted flares) used during military drill involving Ukrainian Marines, confirmed by their spokesman.”