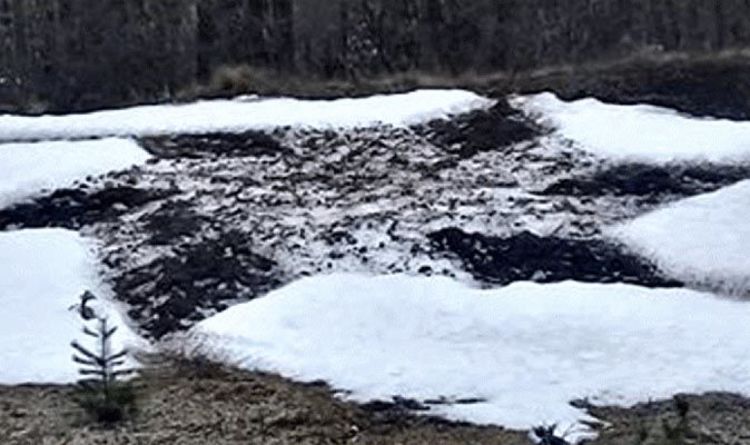 
Alien hunters were up in arms when a young man named Rodrigo spotted what looks like a landing print left in the snow in a small village called Moquehue.

Two separate prints were left – one is a swirling shape while the other looks similar to a star on October 15.

What makes UFO investigators believe it was left by an alien spaceship is that the marks are fresh and there are no footprints in the surrounding snow.

After returning to his family, he made them aware where they returned and took photographs of the ‘UFO landing’.

Rodrigo continued: “I was surprised that there were no footprints nearby. This in an area that is rarely visited.

“I believe UFOs exist. Perhaps it was them.”

Many people in Argentina believe aliens are trying to contact them, it would seem.

A UFO ‘landing pad’ was built in the wilderness of Argentina by a man who claims aliens told him to create the site.

The larger monuments is surrounded by smaller pieces and can be seen from the skies, which would be handy for any UFO’s driven by aliens as they near Earth.

The site attracts hundreds of visitors a year and Mr Jaisli decided to build it when he claims he received a “telepathic message” from extraterrestrials in which they told him they needed a place to land when they arrive at our planet.

He told Argentine newspaper El Tribuno: “I was in Fuerte Alto with my neighbor Luis. It was midnight on November 24, 2008.

“’It’s a UFO night,’ I said to Luis. And the sentence was not over, when two luminous objects advanced about 200 meters above the Calchaquí River.

“They were solid, circular and like burnished metal. I do not know why, but mentally I asked them to come closer. And they did it!

“They asked me telepathically to build the airport.”