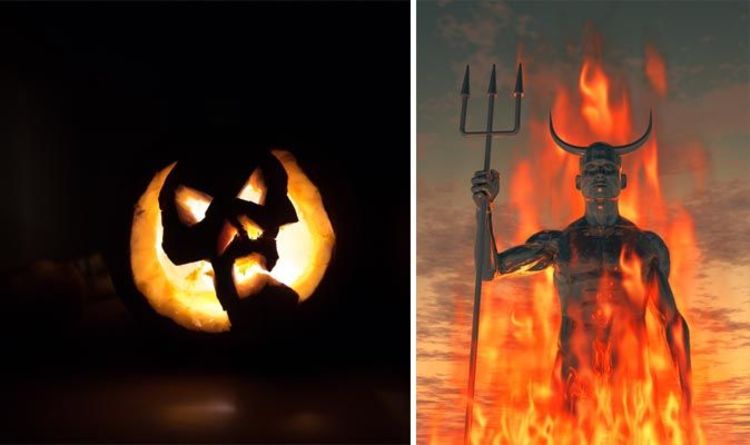 
While Halloween fever seems to grip America in October, just 13 percent of Christians in the US agree with celebrating.

And former Satanist, John Ramirez, who was a high ranking priest in a Devil-worshipping cult, has warned everyone against celebrating Halloween as it opens the door for demons.

Mr Ramirez believes the holiday, which was originally started as a remembrance of the dead, belongs to the Devil and his worshippers, and says that once you celebrate Halloween, your family could be cursed for generations to come.

In an interview with CBN, Mr Ramirez said: “I was a general to the kingdom of darkness in witchcraft.

“But the door’s still open. You just cursed your family from three to four generations.

“You have to be aware it’s a curse. You have to go back to the place where you started, that year that you started that Halloween thing, the celebration when you started having that encounter with the dark side.

“You have to go back to that same spot and renounce and renounce it in the name of Jesus Christ and ask God to forgive you for that so that God can have mercy and close that door so your whole family can move forward.”

However, Pastor Alan Rudnick believes it is time for Christians to claim Halloween as their own.

Pastor Rudnick wrote on his blog: “Halloween is often associated with the pagan concept of Samhain, the festival where ancient pagans believed that the worlds of the living and dead would have been thinly divided.

“But, we have seen from the other ancient pagan festivals associated with Christmas and Easter that these pagan connections do not serve as a reason why we cannot celebrate a Christian holiday.”

Halloween celebrations are rooted in the Gaelic start of winter, known as Samhai.

A Nuclear War Could Starve Billions, But One Country May Be Safer Than The Rest : ScienceAlert
‘Extreme Heat Belt’ to Snare 100 Million Americans in Decades, Scientists Warn : ScienceAlert
This Artificial Synapse Can Run a Million Times Faster Than Ones in The Human Brain : ScienceAlert
These Asteroid Particles May Be Our Most ‘Pristine’ Sample of The Outer Solar System : ScienceAlert
Astronomers Charted The Sun’s Life, And This Is How The Story Ends : ScienceAlert