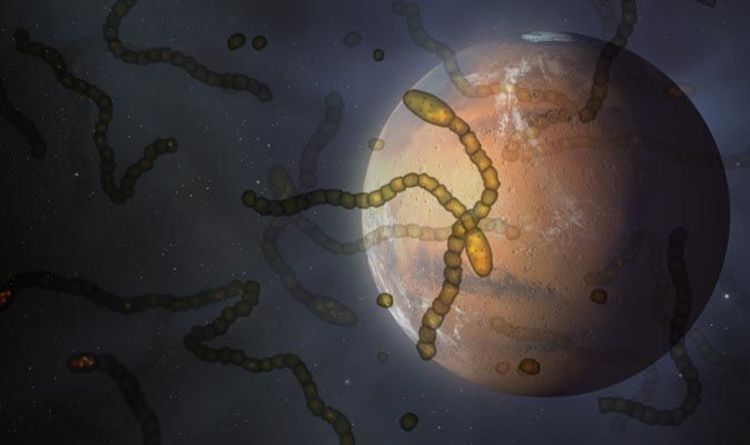 
In June this year, scientists at NASA discovered what appears to be an existing lake of water beneath the south polar ice cap on the Red Planet.

The study states that when life on Earth was emerging, algae evolved photosynthesis – the ability to convert light into energy which sent atmospheric levels soaring.

But on Mars, NASA scientists discovered just trace-amounts of light-induced breakdown of carbon dioxide – leading experts to rule out the possibility of life.

However, a new computer model now shows this does not apply to the briny underground lakes on the Red Planet composed of salt and water where the researchers have found oxygen levels are the highest.

Lead author Dr Vlada Stamenkovic, a planetary scientist at the California Institute of Technology, said the briny water will also be abundant in calcium and magnesium which which boost bone and metabolism.

Speaking of the study published in Nature Geoscience, he said places “with sufficient oxygen available for aerobic microbes to breathe” may be all over the Red Planet.

He said that these areas would be more common on the Martian poles.

The sea sponge is the most primitive of all multi cellular animals and emerged on Earth around 640 million years ago. Most significantly, the majority live in briny salt-water.

Dr Stamenkovic said: “Due to the scarcity of oxygen in the modern Martian atmosphere, Mars has been assumed to be incapable of producing environments with sufficiently large concentrations to support aerobic respiration.

“Here, we present a thermodynamic framework for the solubility of oxygen in brines under Martian near-surface conditions.”

The computer simulations showed underground lakes across Mars could support life “across the planet” – with the likeliest locations at the polar regions.

Dr Stamenkovic said: “Even at the limits of the uncertainties, our findings suggest there can be near surface environments on Mars with sufficient oxygen available for aerobic microbes to breathe.”

Recent studies have shown that hydrated magnesium and calcium salts deposits are found at various locations around Mars.

This means here could be oxygen “comparable to the concentrations in Earth’s oceans today.”

Dr Stamenkovic said: “Thus, in principle, Mars could offer a wide range of near-surface environments with enough dissolved oxygen for aerobic respiration like that seen in diverse groups of terrestrial microorganisms.”

The south polar body of water is about 20 kilometres across and, if confirmed, would be the first evidence of permanent water on the Red Planet.

Space agency NASA’s Curiosity Rover had found that liquid water does flow intermittently on Mars and it also detected that water had existed there in the past.

But if water is still there, it would mean it has likely been constant throughout Mars’ 4.6 billion year history – making the possibility of life much more likely.

Extreme Drought in Italy Reveals Hidden Bomb Submerged in River Since WWII
An Experimental Surgical Robot Is Headed to The International Space Station
A Common ‘Forever Chemical’ Has Just Been Linked to Liver Cancer in Humans : ScienceAlert
New Predictions Reveal The Fate of The World’s Biggest Ice Sheet if We Don’t Act : ScienceAlert
‘Structured Water’ Is Not What People Claim. Don’t Believe The Hype, Scientist Says