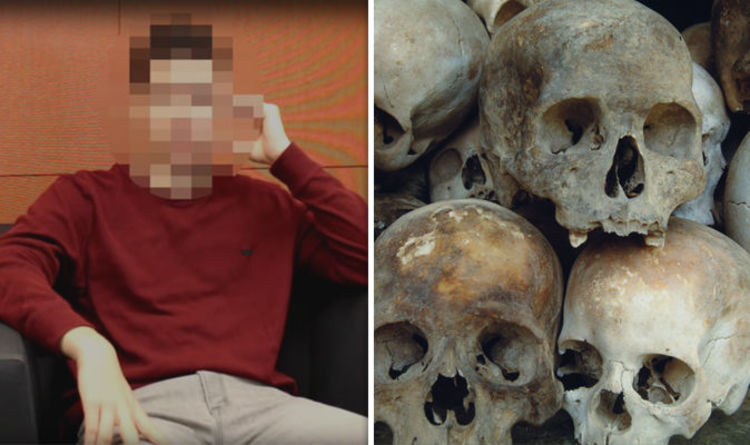 
In the latest video uploaded to Youtube channel Apex TV, “time traveller” Noah from the year 2030 “bravely” spoken about a secret government project involving time travel – although he does not specify which government, but he has an American accent.

He says he was stranded in the year 2018 after being fired from his job during a mission because of “incompetence”.

In the video Noah appears to be put into a hypnotic trance and before he recounts how he became stuck in our time, although he claims it was down to his colleague’s mistake.

He said: “I know them enough that they will come and kill you guys if you said anything about this.

“I know how to keep my own. They would kill you fast. Trust me.

“It’s all your fault though.”

He then shook violently, clenching his fists before sitting up and gasping.

The hypnotist then reassures the alleged time traveller before asking him what he was seeing.

Noah replied: “It was us going through the usual process of going back in time and I was remembering when I was woken up and told we were not to resume time travelling anymore and we were stuck.

“And I felt anger because I was blaming one of our teammates for being incompetent.”

The time traveller then told the hypnotist he was worried his colleagues would get killed.

He added: “The government killed time travellers that spoke out.

“And I knew they wouldn’t be able to fend for themselves.

“I still can’t believe I got away with it.”

Noah then went on to tell the hypnotist about an impending World War 3 between the two Koreas.

He has made this claim before, at the height of the tension between North Korea and America last year – but apparently, the de-escalation of tension recently is misleading.

The hypnotist thanks Noah and told him: “You are very brave.”

While a lot of the comments of the video are positive, some people seemed incredulous to Noah’s claims.

One commenter said: “That was such bad acting and I thought if you are under hypnosis, someone asks you questions and you answer, not just talk in your sleep. It just seems fake to me.”

Another said: “I don’t get it why wouldn’t you ask him questions about future you didn’t find anything out. And that’s 17.01 mins I will never get back.”

And another added: “Apex has loved a lot of comments so we would not see all the ‘it’s not true’ comments because it’s not true, it’s fake and every normal person can see that this is fake.”

It Turns Out There Is Such a Thing as Good Gossip, According to New Research : ScienceAlert
Narwhals Are So Weird, Scientists Used Chaos Theory to Explain Their Behavior : ScienceAlert
These Are The Most Distant Star Clusters Ever Seen, And We Nearly Missed Them : ScienceAlert
Weight Lifting in Old Age Does More Than Just Keep Your Muscles Strong : ScienceAlert
Shimmering ‘Lakes’ Under The South Pole of Mars Might Be Something Else Entirely : ScienceAlert