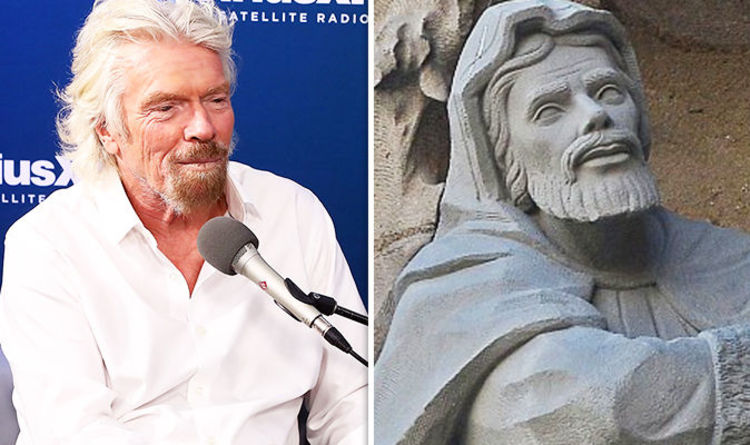 
Upon looking back at a picture he had taken of Gaudi’s famous nativity scene at the Sagrada Familia in Barcelona, photographer Zach Culpin realised that one of the men in a trio of wise men statues looked almost exactly like billionaire Sir Richard.

The 34-year-old photographer from Dorset took the picture while visiting the place of worship when he was on holiday.

He said: “I was on holiday and wanted to visit the Sagrada Familia to see the incredible architecture and Antoni Gaudi’s work in person. The church is absolutely breathtaking, it’s incredible seeing so much history in one place.

“When I got to the Nativity scene, that was made while Gaudi was in charge, I was taking some pictures and admiring the incredible sight.

“But when I looked at the pictures closely on my camera, I couldn’t believe my eyes.

“As I got to my pictures of the three wise men, the man at the back of the group looked just like Richard Branson. It isn’t just a slight resemblance either.

“If someone didn’t know the history of the building and how long the statue had been there, they could be forgiven for thinking it was based on Branson. I definitely did a double take when I saw it.”

The architect Francisco Paula de Villa began construction of the Sagrada Familia began in 1882, however, he quit a year later and handed the job over to Gaudi.

Gaudi spent much of his life working on the church until he died at the age of 73.

When he died, Gaudi was less than a quarter of the way through the project.

Although construction on the Sagrada Familia began in 1882, it is not scheduled to be completed until 2026 – the Centenary of Gaudi’s death.

A spokesperson for Sagrada Familia said: “Any resemblance of the king’s carved statues with Richard Branson is mere coincidence.”

Allegations made in jest about Richard Branson being a time traveller have come as a series of self-proclaimed “time travellers” from the future claim to have returned to the present to warn about the direction of the planet going forward.

One “time traveller” from the year 2043 last month even recorded himself to warn the planet of nuclear holocaust at the hands of North Korea and the US in the coming months.

This Rembrandt Has Been Hiding a Surprising Secret For Centuries : ScienceAlert
Major Blow as Experimental HIV Vaccine Fails in Late Clinical Trial : ScienceAlert
Scans of Mummified ‘Golden Boy’ Reveal He Was Covered in Magical Protections : ScienceAlert
Bacteria Can Use Plastic Waste as a Food Source, Which Isn’t as Good as It Sounds : ScienceAlert
There’s a ‘Lost City’ Deep in The Ocean, And It’s Unlike Anything We’ve Ever Seen : ScienceAlert