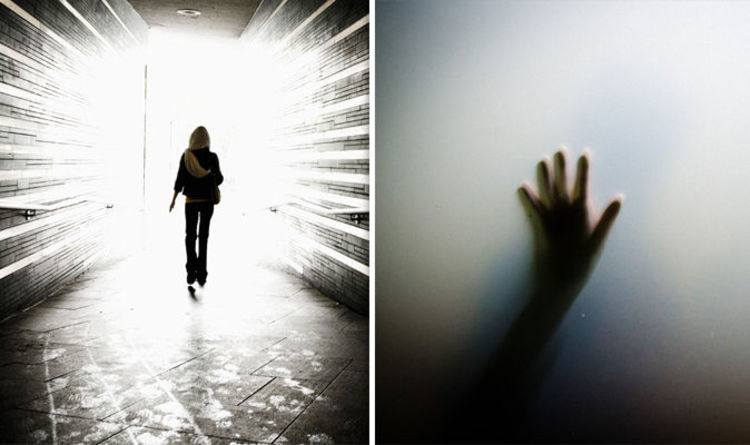 
A website known as the Near Death Experience Research Foundation has been looking compiling stories from the afterlife.

One of the accounts, from a person who was resuscitated after a suicide attempt, reads: “I remember feeling terrified. It was so dark and I could not see anything below me, so it was hard to figure out what was going on.

“As the Beings pulled me into their midst, it seemed squishy and wet, as well as dark and cold. Meanwhile, the Beings all around me were ripping and tearing at me.

“I was thinking that I didn’t like this at all and wanted to go back.”

Another person, a woman only known as Hana P who had an NDE after a battle with pneumonia, said: “I had a vision of a grey area with many scattered boards and beams.

“At the top right is a circular light, which had an incredibly bright centre that was inviting me to enter. Suddenly I realised with horror that it was the transition between life and death.

“I said, ‘I do not want to enter. I have not tried everything in my life.’”

However, not all the NDEs were negative.

A man under the name Richard L said that after a seizure, he was close to death and felt peace.

He said: “I felt no pain. I felt an unending love and a sense of peace as I kept floating towards the light.”

Another, Alexander S, who says he was attacked and had to be brought back from the brink by doctors, said: “I saw a very bright light almost like at the end of a tunnel. It made me so warm and happy.

“I could just the see clouds and then I heard voices in the background.”

It follows on from a newly released study which claims that you will know when you are dead.

A study has found that the dead person’s mind and consciousness continue to work, at least for a short time – meaning the deceased can recognise their own death.

Indeed there is some evidence to suggest the ‘dead person’ may even hear their own death being announced as they lie on the operating theatre table.

Dr. Sam Parnia, director of critical care and resuscitation research at NYU Langone School of Medicine in New York City, said people in the first phase of death may still experience some form of consciousness.

“Once that happens, blood no longer circulates to the brain, which means brain function halts almost instantaneously.

“You lose all your brain stem reflexes — your gag reflex, your pupil reflex, all that is gone.”

Dr Parnia and his team continue to investigate the pervasiveness of consciousness after death with twin studies in Europe and the United States who have suffered cardiac arrest, in the largest study of its kind.

He said: “In the same way that a group of researchers might be studying the qualitative nature of the human experience of ‘love,’ for instance, we’re trying to understand the exact features that people experience when they go through death, because we understand that this is going to reflect the universal experience we’re all going to have when we die.”

Our Body Temps Have Been Dropping For 160 Years. Gut Microbes May Be Playing a Role : ScienceAlert
Sword Mistaken For Replica Is Actually An Ancient 3,000-Year-Old Weapon : ScienceAlert
Mysterious ‘Zone of Uncertainty’ Inside The Brain Reveals a Surprise : ScienceAlert
This Physicist Says Electrons Spin in Quantum Physics After All. Here’s Why : ScienceAlert
An Expert Explains Why The Radioactive Water Stored at Fukushima Should Be Released : ScienceAlert