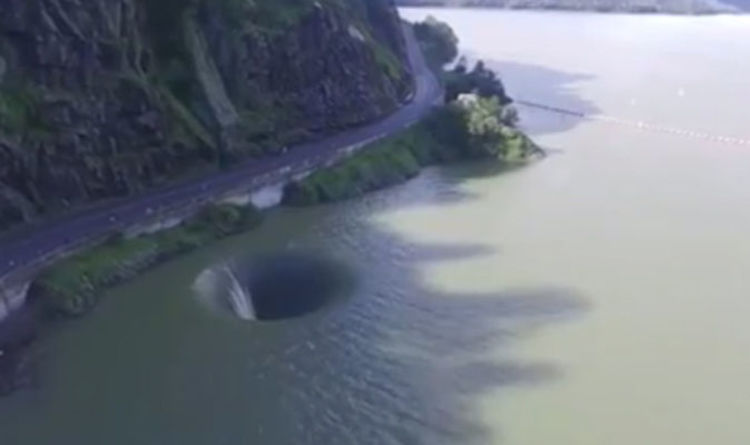 
Swimmers were left gobsmacked after a hole appeared in the middle of the water.

The video which was uploaded to Gfycat, was posted on Reddit, where it gained a mass of popularity.

The clip has currently over 150,000 views and has left viewers terrified.

One comment read: “Why is there a giant hole in the middle of the lake where people swim, and why is there not a rope around?”

Another stated: “That looks very unsafe.”

And a third added: “That right there is the portal to Hell.”

However, the giant hole was actually a man-made spillway, also known as a Glory Hole.

The tunnel is used to drain the lake to stop it from overflowing.

Lake Berryessa can hold around 521billion gallons of water before the excess begins to flow into the spillway.

The Glory Hole then drains all the excess water.

In 1997, swimmer Emily Schwalek died after being pulled down the Glory Hole.

It was reported that Ms Schwalek was swimming towards to gaping hole and spent 20 minutes gripping on to the edge before dropping out of sight.

Last year the Lake Berryessa reservoir reached its full capacity for the first time in 11 years.

This comes after a bottomless crater has been discovered in Siberia.

Footage of the crater has been viewed almost 1.5million times on YouTube and the internet has been bombarded with rumours about what made the giant hole.

Conspiracy theorists have suggested it was caused by a UFO, whereas others have said it was left by a meteor that hit Earth.

Speaking to The Siberian Times a government official said it was too early to say what caused the hole but did rule out it being a meteorite.

The official said: “We can definitely say that it is not a meteorite. No details yet.”

A report by Russian news channel Zvezda TV said the dark colour of the crater indicates “some temperature processes”.

Study of 500,000 Medical Records Links Viruses to Alzheimer’s Again And Again : ScienceAlert
Scans of Mummified ‘Golden Boy’ Reveal He Was Covered in Magical Protections : ScienceAlert
‘Funky Worm’ Fossil Helps Explain The Mysterious Origins of Amphibians : ScienceAlert
Babies May Not Be Born With a Microbiome After All, Scientists Say : ScienceAlert
Sword Mistaken For Replica Is Actually An Ancient 3,000-Year-Old Weapon : ScienceAlert