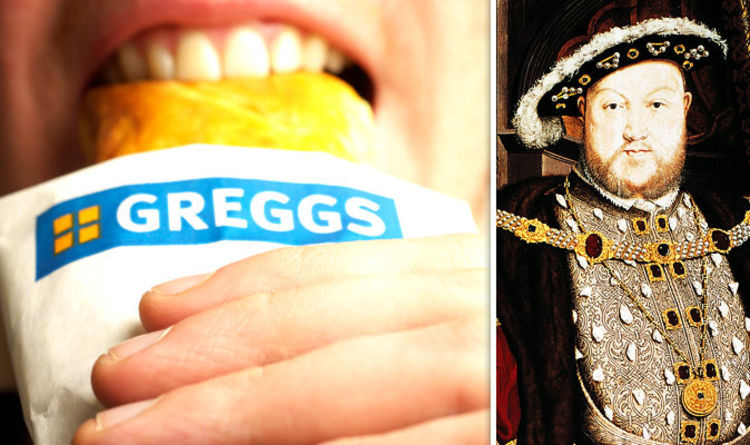 
Luke from Manchester noticed that in one of the former king’s iconic portraits, it appears that he is wearing shoes that bare an incredible similarity to one of Greggs’ most popular snacks.

He wrote: “Why do Henry VIII’s shoes look like a Greggs steak bake?”

After making the incredible discovery, the bakery chain replied and was clearly enamoured with the finding.

It replied: “Losing our heads over this.”

Other users joined in on the pastry discovery and later corrected Luke to claim that the bake pictured was in fact a cheese and onion pastry.

Is it possible that Henry VIII harnessed the power of time travel to take advantage of the delicious pastry?

One Twitter user joked that wearing pastries was how “nobles kept their feet warm”.

They posted: “It was how the nobles kept their feet warm, there was no central heating back then.

“Commoners had to make do with a raw turnip shoe.”

Greggs recently declared that their Sausage Rolls are sold at an incredible rate of five a second.

The figure means that 145million of the pastries are sold every year.

But how many of these are purchased from Henry VIII travelling forward in time?

He is widely known for his six marriages and his long search to produce a male heir.

Henry VIII’s father, Henry VII was renown for putting an end to the Wars of the Roses by defeating Richard III at the Battle of Bosworth Field on August 22, 1485.

These 5 Traces of Ancient Ancestors Still Exist in Human Bodies Today : ScienceAlert
There’s a ‘Lost City’ Deep in The Ocean, And It’s Unlike Anything We’ve Ever Seen : ScienceAlert
‘Funky Worm’ Fossil Helps Explain The Mysterious Origins of Amphibians : ScienceAlert
Viagra Linked to Much Lower Risk of Death in Men, But Questions Remain : ScienceAlert
Mysterious ‘Zone of Uncertainty’ Inside The Brain Reveals a Surprise : ScienceAlert