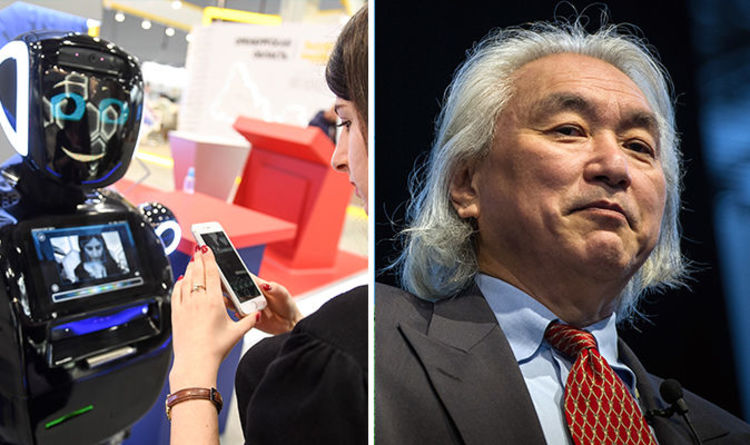 
Dr Kaku, a prominent futurist, believes we can avoid creating killer robots by simply implanting chips in their ‘brains’ to handle any threatening thoughts.

During a Reddit AMA – an ask me anything question and answer session – he warned that robots could develop intelligence fast enough to pose a threat before the end of the century.

He said: “I think we should chip their brain to shut them off if they have murderous thoughts.”

In Dr Kaku’s opinion, robots have the “intelligence of a bug” and are unable to do human tasks as simple as picking up garbage or fixing a toilet.

Though “they can barely walk across a room”, he expects it is only a matter of time before robots develop the brain function of “a mouse, then a rat, then a cat, dog and monkey”.

He believes that once robots reach such a high level of intelligence they may be able to replace humans with the ability to “evade even our most sophisticated fail safe systems.”

At that point, Kaku believes that humans should merge with his expected robot overlords.

He said: “This may sound strange to some people, but remember that this is the people of the far future who will decide how far they want to modify themselves to deal with super smart robot.”

In previous interviews, the futurist said that humans will be forced to decide whether or not they want to compete with hyper intelligent robots as soon as 100 hundred years from now.

Instead of competing, he believes we may decide to “genetically modify ourselves a little bit”.

Futurist Ian Pearson has described a similar theory, presuming that AI will be “billions of times smarter” than humans in the future.

He said: “I don’t actually think it’s safe, just like Elon Musk…to develop these superhuman computers until we have a direct link to the human brain…and then don’t get way ahead.”

Speaking of the SpaceX founder and business magnate, Dr Kaku also said he believes Elon Musk is helping guide us into the ‘Golden Age’ of space travel but was skeptical that SpaceX would be able to achieve its planned space travel in time.

Mr Musk plans to send two cargo ships to Mars in 2022, followed by four other vessels – two with cargo and two with human settlers – in 2024.

Dr Kaku said: “I think Elon Musk has made a great contribution to creating a genuine moon rocket, the Falcon Heavy, and doing it with private funds.

“So now we have two moon rockets, the SLS and the Falcon Heavy, and that is what is important.

“Time tables, of course, come and go. Personally, I think his time frame may be a bit optimistic, but that is not the point.

“The point is that he is making it possible to enter a new Golden Age of space exploration, almost free of charge to the taxpayer.”