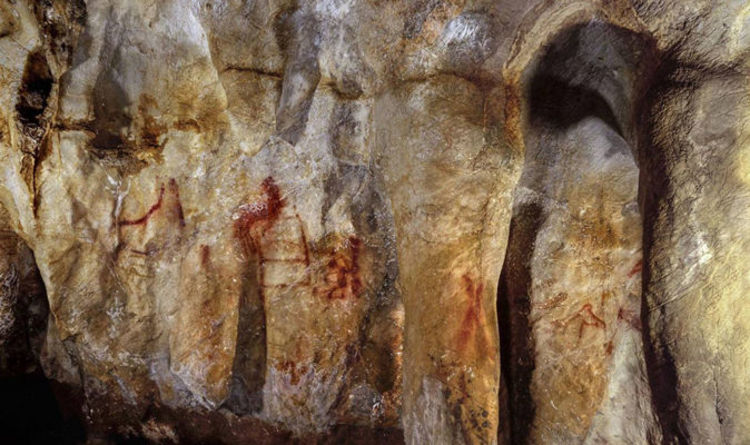 
Instead they were probably the work of our extinct sister species, the Neanderthals – once dismissed as stupid brutish creatures having more in common with chimpanzees than people.

Scientists now know that the Neanderthals were no ape-men. They used simple stone and bone tools, wore clothing, adorned their bodies and may have had a complex language.

The latest discoveries published in the journal Science show that Neanderthals were capable of highly sophisticated symbolic thought.

The cave paintings, made with red and black pigments, consist of groups of animals, dots and abstract geometric designs, as well as stencilled hand prints.

They occupy three sites at La Pasiega, Maltravieso and Ardales – situated up to 700 kilometres apart in different parts of Spain.

A state-of-the-art technique was used to date the paintings more accurately than has ever been possible before.

The findings fixed the age of the art works at 64,000 years ago – long before the arrival of the first “modern” humans in western Europe. The only “people” around in that part of the world at the time were Neanderthals.

Archaeologist and joint lead researcher Dr Chris Standish, from the University of Southampton, said: “This is an incredibly exciting discovery which suggests Neanderthals were much more sophisticated than is popularly believed.

“Our results show that the paintings we dated are, by far, the oldest known cave art in the world, and were created at least 20,000 years before modern humans arrived in Europe from Africa – therefore they must have been painted by Neanderthals.”

The dating method involved sampling ultra-thin carbonate deposits built up over time that contain the “mother and daughter” radioactive elements uranium and thorium.

Measuring the relative levels of the two elements indicates how long it has taken for one to decay into the other. The technique is far more reliable than traditional radiocarbon dating, which can give false age estimates.

The scientists analysed more than 60 carbonate samples taken from the paintings.

Co-author Professor Alistair Pike, also from the University of Southampton, said: “Soon after the discovery of the first of their fossils in the 19th century, Neanderthals were portrayed as brutish and uncultured, incapable of art and symbolic behaviour, and some of these views persist today.

“The issue of just how human-like Neanderthals behaved is a hotly debated issue. Our findings will make a significant contribution to that debate.”

Neanderthals co-existed with Homo sapiens for thousands of years in Europe and Asia and the two kinds of human are thought to have interbred.

They became extinct around 38,000 years ago for reasons that are still not clear. Two leading theories are an inability to adapt to climate change and competition from our ancestors. Or possibly they may simply have been “assimilated” into the growing modern human population.

Study co-author Professor Paul Pettitt, from the University of Durham, said: “Neanderthals created meaningful symbols in meaningful places. The art is not a one-off accident.

“We have examples in three caves 700km apart, and evidence that it was a long-lived tradition. It is quite possible that similar cave art in other caves in western Europe is of Neanderthal origin as well.”

Losing Focus May Actually Boost Learning, Study Finds : ScienceAlert
Viagra Linked to Much Lower Risk of Death in Men, But Questions Remain : ScienceAlert
This Species of Carnivorous Plant Evolved Into a Toilet And Is Now Winning at Life : ScienceAlert
There’s a ‘Lost City’ Deep in The Ocean, And It’s Unlike Anything We’ve Ever Seen : ScienceAlert
Earth’s Inner Core May Right Now Be in The Process of Changing Direction : ScienceAlert