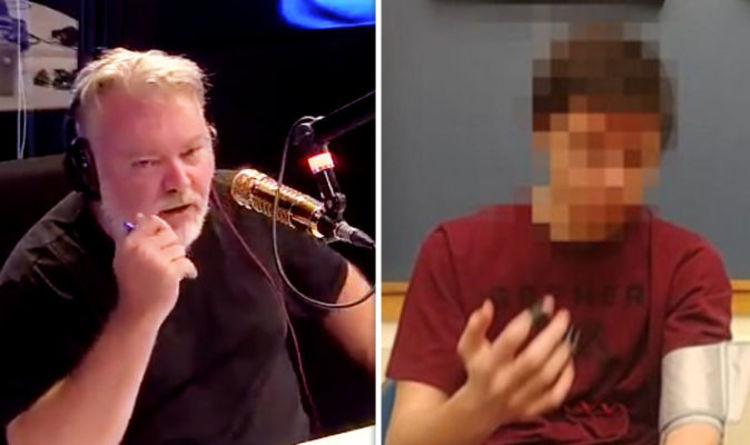 
The man called “Noah” passed a lie detector where he claimed Donald Trump will be re-elected and artificial intelligence will take over.

He went on to stun Australian radio hosts Kyle and Jackie O as he predicted that there will be a 21-year-old female President called Ilana Remikee who will become President in 2030.

The man, whose face and voice was distorted to hide his identity, said on Sydney’s KIIS 106.5: “She’s the granddaughter of Martin Luther King Jr.

“She’s 21 at the time, but they pass a new law that basically makes it so you can be younger as president.”

There was a pregnant silence before Kyle exhaled and said: “Wow.”

When pressed about who will be the President of the US after Donald Trump, the time traveller said he cannot say who it is because the “President does something really bad” and “is a current political figure at the moment”.

Noah claims he is older than he looks because he takes “anti-ageing pills” to keep him the same age while he time travels.

He said: “When you time travel you gain time. When I was in junior high and I was a time traveller, I had to take these pills to make sure I don’t grow old while time travelling.”

Radio host Kyle pressed: “’So the pills are to keep you the age you are? Not make you younger?”

To which Noah said that was correct.

The time traveller also says people will be able to make “designer babies” but it will be expensive, that Google Glass-style robotics will spread across the globe and that technology will have developed to the point where it can run a home independently.

He also claims bitcoin will be popular, but normal currency will still be in use.

Humans will reach Mars in 2028, which will also be the same year time travelling is discovered, according to Noah.

In a Youtube video posted last year, Noah claimed he risked his life to travel back in time to warn humanity about the dangers of the future.

He said: “I am not attempting to deceive anyone, my sole objective is to prove to you that time travel exists and that I, myself, am a time traveller.

“First of all, time travel became possible in the year 2003, it is only used by top-secret organisations. The ability to time travel will not be released to the public until 2028.”

On Apex TV he passed the lie detector test with flying colours.

The interview begins and Noah is asked a simple question: ”Are you an actual time traveller from the year 2030?”

He responds with a yes and “true” appears in large green letters superimposed on the video. However, the results on the machine are not shown.

However, critics have been quick to point out that viewers do not see the results of the lie detector tests.

One viewer said: “All Apex TV does is flash an answer on the screen with a ding noise, that doesn’t truly validate the lie detector.

“You can see Noah fidgeting around with the monitors strapped around his fingers and I myself know from first-hand experience that when you take a lie detector test you are supposed to sit back and remain completely still.”

It should also be noted that lie detector results are not admissible in court due to many different factors which may affect results including people manipulating readings.

Study of 500,000 Medical Records Links Viruses to Alzheimer’s Again And Again : ScienceAlert
JWST Has Found Life’s Elemental Building Blocks in The Depths of Darkest Space : ScienceAlert
Dogs Can Be Aggressive For Lots of Reasons, And One of Them Is You : ScienceAlert
Babies May Not Be Born With a Microbiome After All, Scientists Say : ScienceAlert
Hypertension Drug Shown to Extend Lifespan And Slow Aging in Animals : ScienceAlert