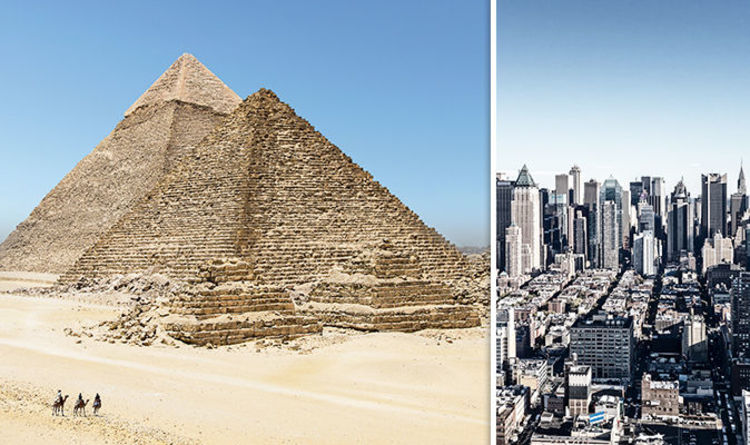 
The technique, dubbed light detection and ranging scanning (lidar) utilises a rapid deployment of laser pulses that shoot from an aircraft to map out a three-dimensional image of a chosen landscape.

An archaeologist at Colorado State University, Chris Fisher, presented the incredible findings at a conferred of the American Association for the Advancement of Science in Austin, Texas, this week.

He declared: “To think that this massive city existed in the heartland of Mexico for all this time and nobody knew it was there is kind of amazing.

Lidar discovered the city, known as Angamuco, that was more than twice as big as the town of Tzintzuntzan towards the west of Mexico City.

The area was bigger than 26 kilometres squared.

Mr Fisher went on: “That is a huge area with a lot of people and a lot of architectural foundations that are represented.”

Pyramids and open plazas were discovered in the ancient city – the archaeologist explained that more than 100,000 were thought to have lived there during the period of 1000AD to 1350AD.

The town is understood to have been built by a people known as the Purépecha that were a major civilisation of people during the 16th century.

The Aztecs attempted to conquer the Purépecha several times but were never successful.

Mr Fisher added: “[Its size] would make it the biggest city that we know of right now in western Mexico during this period.”

Lidar was able to reveal distinct features of the area at a high resolution that showed the positioning of pyramids and a well.

Angamuco was found by archaeologists in 2007 before technologies such as lidar were prominent.

Back then it was estimated that it would have taken at least 10 years to map out the whole area due to its difficult terrain.

Mr Fisher is a clear proponent of lidar technology and noted that it is going to continue to make new discoveries.

He claimed: “Everywhere you point the lidar instrument you find new stuff, and that is because we know so little about the archaeological universe in the Americas right now.”

What Can They Actually See? : ScienceAlert
A Lost Interview With The ‘Father of The Big Bang’ Was Just Discovered : ScienceAlert
How a Dead Girl in Paris Wound Up With The Most-Kissed Lips in All of History : ScienceAlert
We Used to Hate Commuting. Now We Realize We’ve Lost Something. : ScienceAlert
Bar Graphs Induce a Hidden Bias in Interpretation, Experiment Shows : ScienceAlert