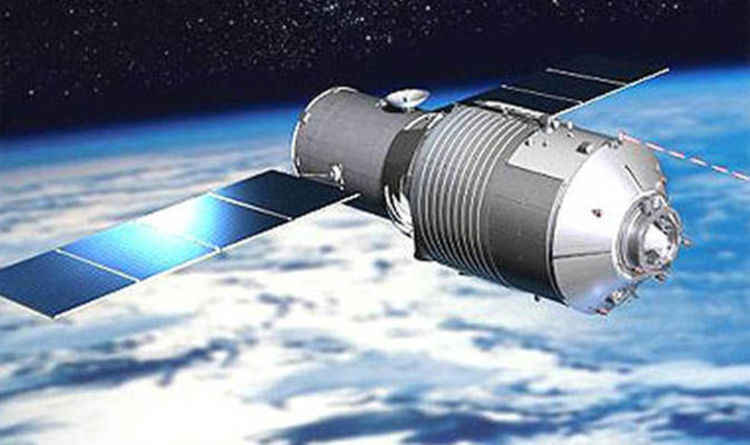 
The ESA forecasts the Tiangong-1 space station will enter Earth’s atmosphere sometime between midday on March 31 and the early afternoon of April 1.

It will now be providing updates every one to two days instead of previous weekly updates but has warned that crash dates and times are still “highly variable”.

As a result the exact location where Tiangong-1 will crash is still unknown.

The ESA do however claim the Chinese satellite’s re-entry will take place somewhere between latitudes 43 degrees North and 43 degres South.

This areas covers as far north as parts of the United States, all of central America and most of southern America.

For Europe potential re-entry reaches as far north as Spain. It also covers the entire continent of Africa, the majority of China and all of India.

All of South East Asia and most of Australia also remain a potential crash site.

The China Manned Space Agency predict that the space station will re-enter the atmosphere between 31 March and 2 April.

Many space enthusiasts are tracking the satellite’s path via Satview.org and at the moment their tracker predicts Tiangong 1’s re-entry will occur on Sunday April 1 at 2.59pm, British time.

Jesse Gossner, an orbital mechanics engineer who teaches at the US Air Force’s Advanced Space Operations School said the uncertainty over when the space station will land is because of the nature of Earth’s atmosphere and how high-speed objects behave in it.

He said: “You’d be surprised just how inaccurate and random it is because of the atmosphere. Have you ever skipped a stone on a lake.

“This thing can bounce off the atmosphere because it’s going so fast. If it hits on its smooth side, sort of like a rock skipping on a lake, it’ll bounce.

“But if it hits on a pointy end, or on one end of a cylinder, in the direction of the velocity, it could dig in.”

What is the Tiangong-1 Chinese space station?

Tiangong-1 is the first space station built and launched by China and is also know as also known as Heavenly Palace.

It was launched aboard a Long March 2F/G rocket in September 2011.

The space station has two modules, a habitable experimental module and a resources module.

In March 2016 China declared in an official statement that it had lost contact with Tiangong-1 prompting fears that the space craft might crash into Earth.

Since then many space agencies have been tracking the path of Tiangong-1 in the hope of accurately predicting its inevitable re-entry into Earth’s atmosphere.

Scientists Create Shapeshifting Humanoid Robot That Can Liquefy And Reform : ScienceAlert
There’s a ‘Lost City’ Deep in The Ocean, And It’s Unlike Anything We’ve Ever Seen : ScienceAlert
Babies May Not Be Born With a Microbiome After All, Scientists Say : ScienceAlert
Our Body Temps Have Been Dropping For 160 Years. Gut Microbes May Be Playing a Role : ScienceAlert
Study of 500,000 Medical Records Links Viruses to Alzheimer’s Again And Again : ScienceAlert