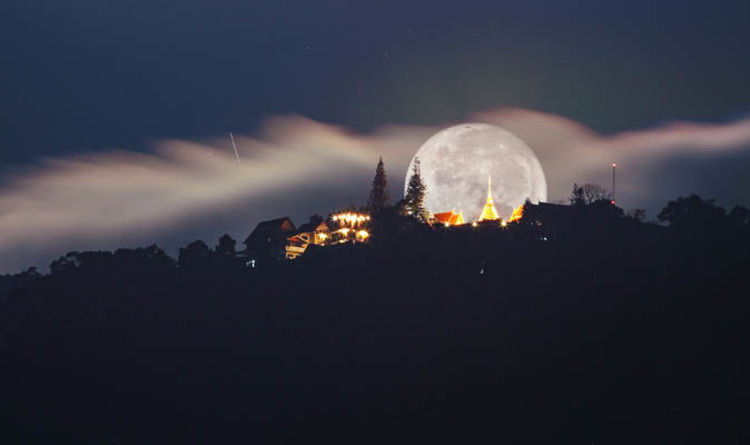 
The second blue moon of the year will rise this weekend two months after the world starred in awe at the incredible rare phenomena of the Super Blue Blood Moon, which appeared on January 31.

Blue Moons are the second full moon to rise within one calendar month and only occur every 2.7 years.

Because they are quite rare, the lunar event helped to coin the saying “once in a blue moon”.

Full moons themselves are not rare, as they occur almost every 29 days, but a blue moon is – and two blue moons in one year is an even more incredible event.

The last time Earth saw two blue moons in one year was in 1999 when February did not have a full moon.

Is there a blue moon TONIGHT?

The second blue moon of the year will happen again this weekend as February did not have a full moon.

The moon will appear at its fullest at around 1.37pm GMT on Saturday, March 31 – meaning the blue moon will not be tonight but stargazers will not have long to wait.

The Easter 2018 Blue Moon will be the last to grace the night skies until Halloween in 2020.

This year’s blue moon is important because it is also used to fix the date of Easter.

The holiday always occurs on the Sunday after the first full moon following the Spring equinox, which was March 20.

As the blue moon will appear on March 31 it means that Easter Sunday is April 1.

How can I watch full moon?

Unfortunately for astronomy enthusiasts, the Blue Moon does not turn blue on Saturday.

We Used to Hate Commuting. Now We Realize We’ve Lost Something. : ScienceAlert
Millions Are at Risk of Flooding Due to Climate Change – But Not Where You’d Think : ScienceAlert
Super-Rare Star System Is a Giant Cosmic Accident Waiting to Happen : ScienceAlert
Scientists Are Making Catfish Hybrids With Alligator DNA For Us to Eat : ScienceAlert
A Splash of Milk in Coffee May Have Health Benefits We Didn’t Know About : ScienceAlert