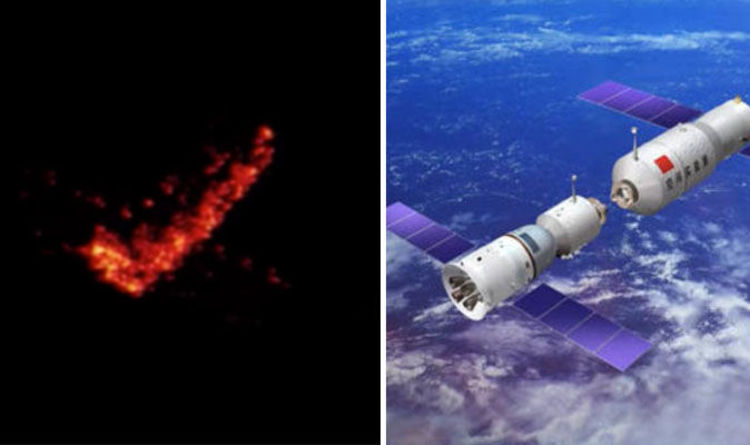 
The out-of-control Tiangong-1 space station is caught in a ‘death spiral’ and will re-enter the Earth’s atmosphere sometime between Friday and Monday, experts have warned.

Most of the spacecraft will break up on re-entry but some debris could survive the searing heat and pressure and slam to the ground at speeds of up to 18,000 miles per hour.

And now scientists have captured terrifying pictured of the space station twisting wildly as it nears Earth.

Shock radar images show it careering through space at unimaginable speeds as it approaches Earth’s atmosphere – with scientists admitting hunks of metal could reach the ground itself.

The Fraunhofer Institute for High-Frequency Physics and Radar Techniques, who captured the radar images, said: “The Chinese space station Tiangong-1 will re-enter the Earth’s atmosphere where it will to a large extent burn up.

“It is possible that some debris will reach the Earth’s surface.”

Another expert predicted a “series of fireballs” for skywatchers as the space station breaks through the Earth’s atmosphere.

Markus Dolensky, of the International Centre for Radio Astronomy Research in Australia told CNN: “There is a chance of a series of fireballs streaking across the sky.

“It is now nearing its fiery demise as it gradually gets slowed down by the fringes of the Earth’s upper atmosphere.”

The spacecraft could crash down almost anywhere in the globe – although the UK is safe.

It could, however, land almost anywhere bar the northern and southern reaches of the globe, with everywhere from Australia to Italy to America at risk.

And to make matters worse, the satellite is believed to be full of toxic hydrazine, which can cause cancer over long periods of exposure.

However the odds of being hit by the falling debris remains miniscule. In 1997 a woman became the first and only person ever to be hit by space debris when a piece of burned up Delta rocket hit her shoulder. She suffered only minor injuries.

An Iceberg The Size of London Has Broken Free From Antarctica Ice Shelf : ScienceAlert
Physicists Break Record Firing a Laser Down Their University Corridor : ScienceAlert
This Physicist Says Electrons Spin in Quantum Physics After All. Here’s Why : ScienceAlert
Viagra Linked to Much Lower Risk of Death in Men, But Questions Remain : ScienceAlert
Dogs Can Be Aggressive For Lots of Reasons, And One of Them Is You : ScienceAlert