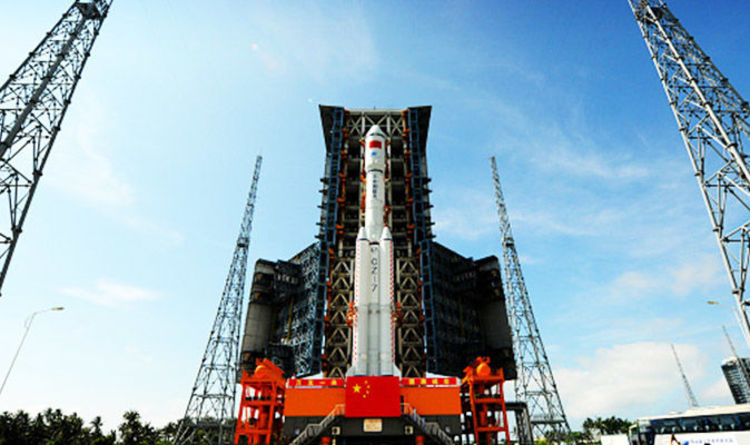 
Space experts say the huge eight-and-a-half tonne mass, which is heavier than an African elephant, could hit a populated area in a worst-case scenario as it starts its fiery ascent into the Earth’s atmosphere.

Tiangong-1, also known as Heavenly Palace, vanished from its Chinese creators’ monitors in March 2016 but has since been relocated.

The European Space Agency (ESA) has said crash date estimates are ‘highly variable’ at present but scientists are giving revised forecasts on the free-falling space station every couple of days.

The China Manned Space Engineering Office said it expected the lab to re-enter the atmosphere between March 31 and April 4, burning up in the process.

Aerospace Corporation, a non-profit spaceflight research company, said the space station will re-enter the atmosphere around April 1 – or three days either side of that date.

Jesse Gossner, an orbital mechanics engineer who teaches at the US Air Force’s Advanced Space Operations School told Business Insider the uncertainty over when the space station will land is due to the nature of Earth’s atmosphere and how high-speed objects behave in it.

Mr Gossner said: “You’d be surprised just how inaccurate and random it is because of the atmosphere. Have you ever skipped a stone on a lake.

“This thing can bounce off the atmosphere because it’s going so fast. If it hits on its smooth side, sort of like a rock skipping on a lake, it’ll bounce. But if it hits on a pointy end, or on one end of a cylinder, in the direction of the velocity, it could dig in.”

At the time of writing, the space station is travelling over Nebraska, USA, but as the defunct Tiangong-1 is travelling at a relevant speed of 27,000 kilometres per hour, this will obliviously change rapidly.

According to Michigan website, MLive says Lower Michigan falls “into the regions listed with the highest probability” of debris from Tiangong-1 hitting.

Hypertension Drug Shown to Extend Lifespan And Slow Aging in Animals : ScienceAlert
This Species of Carnivorous Plant Evolved Into a Toilet And Is Now Winning at Life : ScienceAlert
Our Body Temps Have Been Dropping For 160 Years. Gut Microbes May Be Playing a Role : ScienceAlert
Study of 500,000 Medical Records Links Viruses to Alzheimer’s Again And Again : ScienceAlert
Intriguing Meteorite From Mars Reveals ‘Huge Organic Diversity’, Scientists Say : ScienceAlert