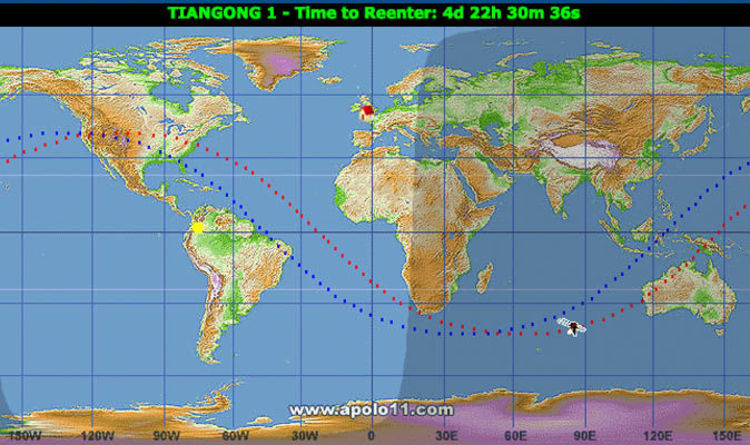 How to track the Chinese space station:

The Tiangong-1 Chinese space station, known as the “Heavenly Palace”, is expected to crash land into Earth between March 31 and April 2, based on the European Space Agency’s (ESA) latest estimates.

Space fans worried about the space station’s descent, can now track the satellite live via the Satview.org satellite tracker here.

The Satview tracker shows the Tiangong-1 in real time, alongside the International Space Station and Hubble Telescope orbital path.

At the moment, the rogue satellite is speeding around the globe at breakneck speeds of 28,000kmh more than 200km above the Earth.

Where will the Chinese space station crash land?

The potential area of impact for the bus-sized Chinese space lab is incredibly uncertain and space experts have warned it will continue to vary the closer it approaches to landing.

These numbers place the satellite’s crash landing in the Atlantic, east of Brazil.

But the Tiangong-1’s re-entry zones calculated by the ESA cast a much wider net to the north and south of the equator.

Tiangong-1: The Chinese space station is set to slam into Earth within days

The ESA map above shows the space station’s potential impact areas in green.

The impact zones span the whole of Africa, most of South America, Central America, vast swathes of the US, southern Europe, Australia and large parts of Asia below eastern Russia.


Reentry will take place anywhere between 43º North and 43º South


The space agency said: “Reentry will take place anywhere between 43º North and 43º South. Areas above or below these latitudes can be excluded.

“At no time will a precise time/location prediction from ESA be possible.

“This forecast was updated approximately weekly through to mid-March, and is now being updated every one or two days.”

American geologist and Apollo 17 astronaut Harrison Hagan Schmitt stands next to the US flag on the surface of the moon, December 1972

The ESA’s predictions are supported by the Aerospace Corporation, a non-profit spaceflight research company, which expects reentry somewhere between 43° North and 43° South latitudes.

But the number of uncertainties involved in the unpredictable descent make it very difficult for researchers to predict how the space station will behave.

The company said: “It is a well known scientific principle that any measurement or prediction will always have an associated uncertainty.

“In the case of most reentering objects, the uncertainty associated with predicting reentry location is extremely large and precludes an accurate location prediction until shortly before the reentry has occurred. 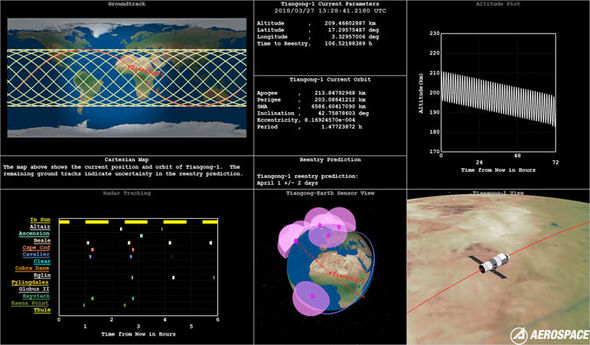 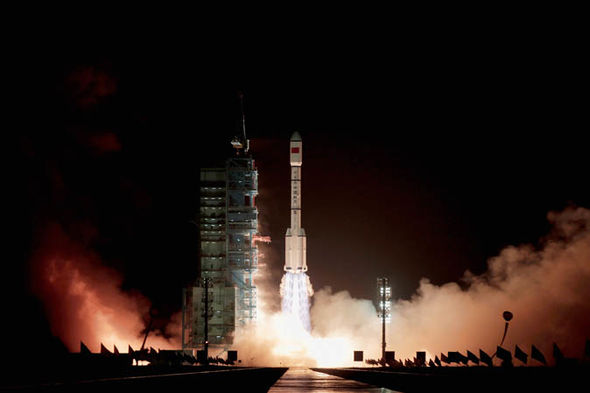 Tiangong-1: The space lab was launched into orbit in 2011

What is the Tiangong-1 Chinese space station?

The Tiangong-1 is the very first space station built by China, launched into orbit in September 2011 onboard a Long March 2F/G rocket.

The space station was designed as a manned lab with a habitable experimental module and a resources module, with a total habitable volume of 15 cubic metres.

In March 2016 Chinese authorities officially announced they had lost contact with the space lab, prompting fears it would crash and burn on Earth.

Space agency and private space forms have since been tracking Tiangong-1’s orbital path in a bid to predict its eventual descent.