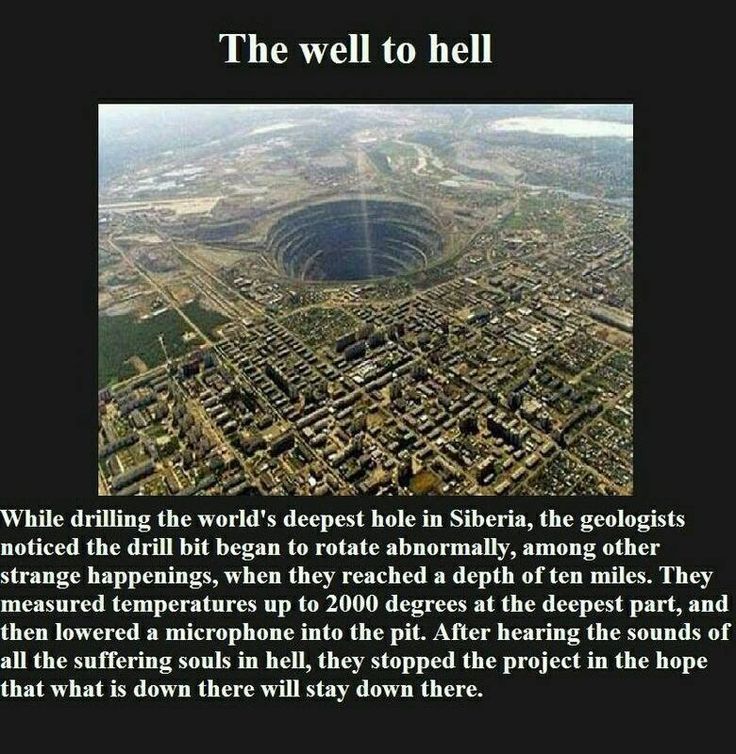 
Siberia is a place mostly reserved for political prisoners and exiles… It’s the hell on Earth!

Somehow, a group of scientists digging in the area found a well to hell. And after hearing the sound of all the suffering souls coming out of the pit, they decided to stop the project to leave what’s down there, down there.

The story goes that in 1989 geologists digging what’s believed to be the Kola Superdeep Borehole where startled after drilling around 12-14 kilometres into the Earth’s crust.

There, sensors recorded a massive temperature spike to 2,000°F (1,100°C) accompanied by what sounded like masses of people screaming and wailing in pain and torment.

The scientists then watched in horror as a massive cloud of gas burst out from the ground and formed itself into a large monstrous bat, which then wrote in Russian “I have conquered” in fiery letters across the night sky.

The media sources most credited for reporting the story are a Finnish Christian publication known as ”Ammennusastia‘ and TBN, a North American Christian broadcast network.

Coast to Coast AM: The Well to Hell Audio (recording begins around 1:55)

For many people this whole episode of scientists finding hell by digging a really deep hole seems as plausible as reaching heaven with a really tall ladder.

Unsurprisingly the account is often dismissed as a hoax, created by Christian organisations to spread fear of the Devil.

Regardless of whether it was based on some actual event or it was totally fake, the ‘Well to Hell’ tale can still be credited for creating some of the freakiest audio recordings to ever be broadcast on radio as an alleged true event.

Major Blow as Experimental HIV Vaccine Fails in Late Clinical Trial : ScienceAlert
Scientists Reveal The Most Distant Galaxy We’ve Ever Found : ScienceAlert
One Simple Idea Makes It Much Easier to Manage Your Weight Over Time : ScienceAlert
‘Funky Worm’ Fossil Helps Explain The Mysterious Origins of Amphibians : ScienceAlert
This Species of Carnivorous Plant Evolved Into a Toilet And Is Now Winning at Life : ScienceAlert