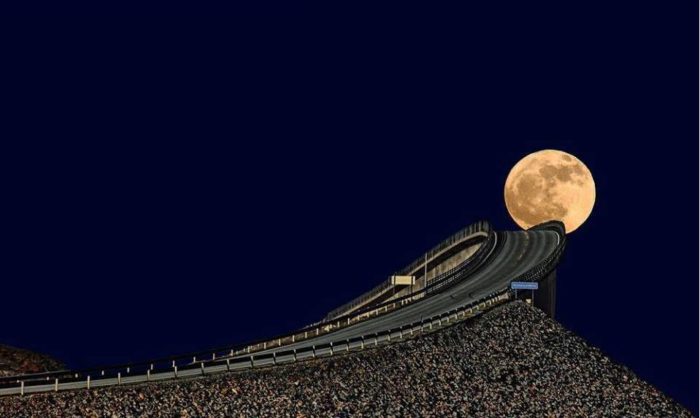 
Is your GPS still working?

Yes, because the Atlantic Highway is five miles of sheer insanity and wave-soaked driving.

Yes do not worry too much, what you will discover in images and videos in this post is a real road in Norway called the Atlantic Ocean Road (Norwegian: Atlanterhavsveien).

It’s five miles of sheer insanity and wave-soaked driving through an archipelago in Eide and Averøy in Møre og Romsdal, Norway.

The Atlantic Ocean Road is a 8.274-kilometer (5.141 mi) long section of County Road 64 which connects the island and municipality of Averøy with the mainland at Eide.

The road runs across an archipelago of partially inhabited islands and skerries. To the north lies Hustadvika, an unsheltered section of the Norwegian Sea, and to the south lies Lauvøyfjorden.

The road has a width of 6.5 meters (21 ft) and a maximum gradient of eight percent.

The road is built on several small islands and skerries, which are connected by several causeways, viaducts and eight bridges — the most prominent being Storseisundet Bridge.

Driving along the Atlantic Road is like teetering on the edge on the sea.

The road’s rollercoaster feel, curvy bridges and phenomenal views have made it a favorite of road trippers and motorcyclists.

This fantastic video gives you an idea of how epic driving this atlantic highway in Norway can be:

Well yes, as you saw it, the brutal waves of the Norwegian Sea often crash over the pavement during storms.

Can you imagine that during its construction the road was subjected to 12 hurricanes!

The road is preserved as a cultural heritage site and its section from Vevang to Bud is classified as one of the eighteen National Tourist Routes around the world.

It is a popular site to film automotive commercials, has been declared the world’s best road trip, and been awarded the title as “Norwegian Construction of the Century”.

To me, the Atlantic Ocean Road looks like a hot wheels playset. What about you?