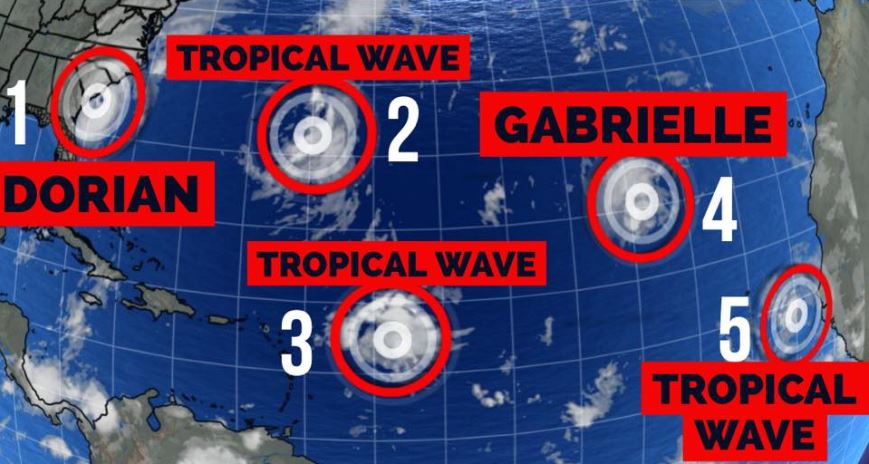 
The tropics are coming alive as we approach the historical peak of hurricane season.

Most of the tropical disturbances we’re monitoring are not a threat to the U.S., but there’s one we should pay particular attention to.

Hurricane Dorian continues to pull away from Florida and is a little stronger this morning. The hurricane is now a Category 3 with 115 mph winds.

The wind field is also growing larger as the storm sits about 50 miles south of Charleston, SC where bands of heaving rain and wind are lashing out along the coast.

Dorian should slowly weaken later today and tonight as the storm runs into some higher wind shear, but the storm will cause major issues over the Carolinas where 10-15 inches of rain will be possible along the coast. The storm will get very close to making landfall over coastal North Carolina where storm surge and damaging hurricane-force winds will be the main concern along with the flooding rain.

After impacting the Carolina coast, the maritime provinces of Canada will likely take a hit from Dorian this weekend as it continues to maintain hurricane strength through Sunday. One of the most powerful hurricanes of our lifetime will finally end its life cycle near Greenland on Monday after it transitions to a non-tropical system.

Elsewhere in the tropics, Tropical Storm Gabrielle, which formed early Wednesday near the Cabo Verde Islands in the eastern Atlantic, will continue mostly north over the next few days.

Longer-term, models keep Gabrielle well out over the Atlantic as a tropical storm, eventually turning the storm northeast into colder waters. It poses no threat to land over the next week.

We’re also monitoring three tropical waves that have the potential to develop into tropical systems down the road. Most of these will re-curve harmlessly out to sea, but there is one that just rolled off the coast of Africa that’s worth keeping an eye on.

This disturbance has a 50 percent chance to develop in the next five days, according to the National Hurricane Center. This is actually down 10 percent from the Wednesday morning outlook.

One reason for this is that the wave is moving into a strong burst of Saharan dry air and dust near the Cabo Verde Islands.