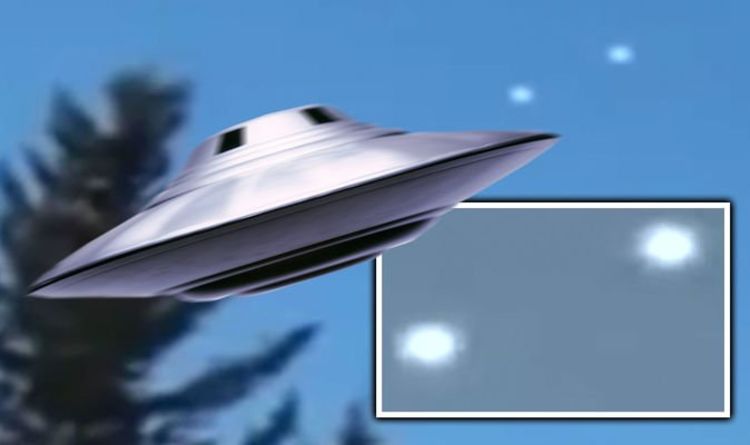 Purported alien expert Scott Waring took to his etdatabase.com blog to speculate about the bizarre amateur UFO video. Mr Waring wrote: “Two white glowing orbs have been spotted flying through the sky in the daytime. And this quite amazing UFO sighting occurred in Clayville, New York.”

I am pretty certain this is the real thing

UFO enthusiast Mr Waring proceeded to explain why he believes in the validity of the footage.

He said: “CGI normally only lasts for 10 seconds and this is nearly a whole minute. So I am pretty certain this is the real thing.”

The UFOs’ white colours can be seen to closely resemble the clouds nearby, which he believes could be a cloaking device.

UFO sighting: A pair of of “alien” UFOs have been spotted hovering over New York (Image: Getty)

Alien life authority Mr Waring claims this is not unusual occurrence for UFOs.

He added “It is however very rare to see them travelling outside the cloud. Usually they dart from cloud to cloud.”

The strange sighting is not the first time UFOs have been sighted over New York.

The conspiracy world was stunned in June after videos of strange cylindrical objects reportedly appearing in the skies over the US emerged.

Another resident in Clayville believes they may have filmed one on camera.

The footage, posted to YouTube by beamsinvestgations1, appears to show a black cylindrical object hovering in the sky on August 6.

It then seems to turn on the spot before its body scrunches up.

UFO sighting: This photo was taken by farmer Paul Trent in the 1950 (Image: Getty)

The British Earth and Aerial Mysteries Society (BEAMS) quoted the witness as saying it was a “gigantic snake UFO” that moved “like it was alive”.

They said in a statement: “Look closely on a tablet, laptop or PC monitor and you will see that this unidentified is comprised of segments or spheres … an intriguing, articulated body.

“As the phone camera struggles to focus, it is patently obvious that the object in question is at a high altitude; so just as the witness described, it must have been ‘gigantic!”

A Splash of Milk in Coffee May Have Health Benefits We Didn’t Know About : ScienceAlert
Ancient Goo Spills The Secrets of How The Egyptians Mummified Their Dead : ScienceAlert
Incredible ‘Fairy’ Robot Sails on The Breeze Like a Floating Dandelion : ScienceAlert
No One Likes Commutes, But They May Actually Be Good For Mental Health, Study Finds : ScienceAlert
New Prototype Device Generates Hydrogen From Untreated Seawater : ScienceAlert