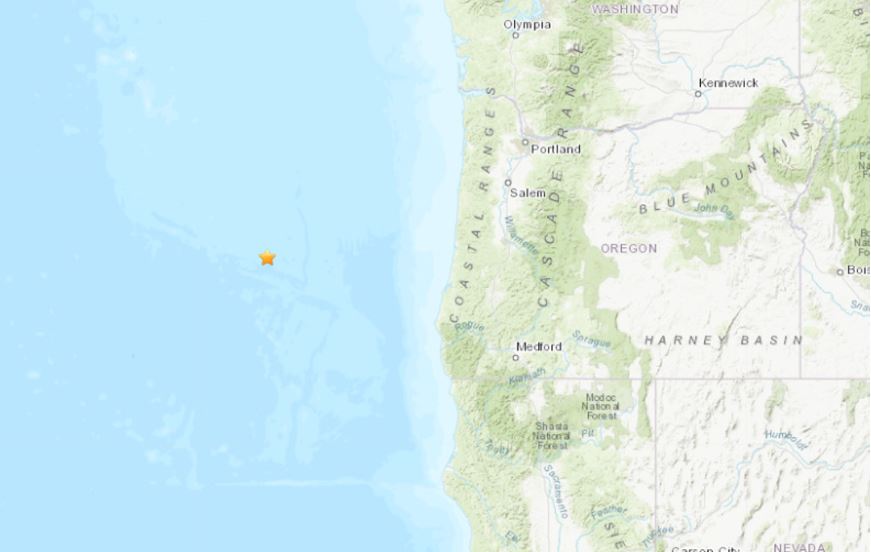 
Just about a week after a M6.3 earthquake hit 171 miles west, northwest of Bandon on Oregon’s south coast at a depth of 3 miles (5.4km), another M5.9 quake was detected today, September 5, 2019 at almost the same location on the Blanco Transform Fault.

The earthquake rattled the ocean floor at off the Oregon Coast at 8:02 a.m., about 177 miles WNW of Bandon, Oregon. At least 16 people reported feeling the quakes on the USGS homepage.

The earthquake was preceded by a 3.7-magnitude earthquake about 32 miles closer to the Oregon coastline detected at 7:25 a.m.

No tsunami is expected on the coastline.

Both of today’s earthquakes follow a 6.3-magnitude earthquake a week ago in the same region.

The earthquakes are located on the Blanco Transform Fault, not the Cascadia Subduction area, according to officials at the Pacific Northwest Seismic Network. The transform fault zone runs northeast off the coast of Oregon in the Pacific Northwest of the United States which runs between the Gorda Ridge to the south and the Juan de Fuca Ridge to the north. The latter are linked to the very dangerous and overdue Cascadia Subduction Zone.

So get ready! Such an earthquake could potentially announce and maybe even trigger the Big Earthquake along the Cascadia subduction zone!

Wildfire Destruction in The Western US Has Doubled in Just 10 Years : ScienceAlert
High-Fat Diets May Break The Brain’s Ability to Regulate Calories : ScienceAlert
No One Likes Commutes, But They May Actually Be Good For Mental Health, Study Finds : ScienceAlert
Orcas Are Contaminated With a Forever Chemical Associated With an Unlikely Product : ScienceAlert
We Used to Hate Commuting. Now We Realize We’ve Lost Something. : ScienceAlert