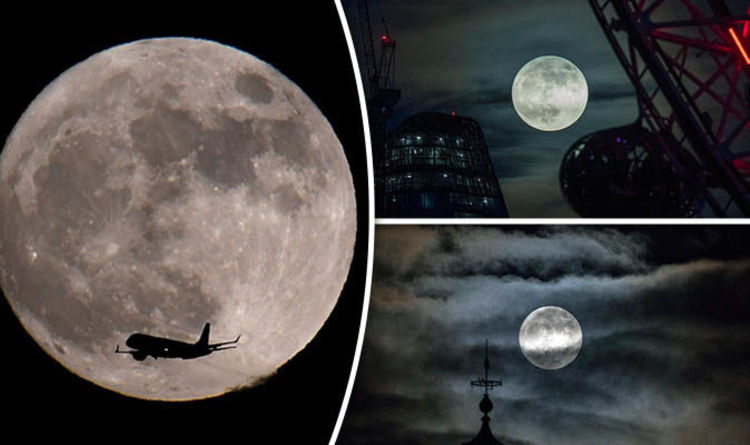 
The supermoon on January 1 is the second in a cycle of three supermoons which started on December 3 2017 and will end on January 31 where we will also experience a lunar total eclipse.

In the UK, the supermoon will peak in the night sky at around 2.24am between January 1 and January 2.

The Virtual Telescope livestream of the supermoon will kick start at 4.00pm GMT tonight (January 1), with commentary from astrophysicist Gianluca Masi.

Tonight’s supermoon will be the closest full moon of 2018 – it will be 1000km closer to Earth than last December’s supermoon.

“The next full ‘supermoon’ will appear a bit more than 7% bigger and a bit brighter than an average full moon, but casual stargazers will not recognise this at their first glance,” Mr Masi, scientific director of the Virtual Telescope Project said.

“These differences are small, only experienced observers can possibly note them, but they add charm to the event, a precious opportunity to admire our natural satellite in the night sky context, an increasingly overlooked and forgotten landscape.”

The Virtual Telescope will show the New Year supermoon while it rises above the skyline of Rome, Italy.

There will be another livestream showing the supermoon on January 1 – the Slooh livestream.

The Slooh livestream will begin at 9pm EST on January 1 in the US or 2am GMT in the UK on Tuesday January 2.

Slow said: “This trilogy of large full moons is not rare, but a wonderful cosmic rhythm – super moons generally come in threes. When a Full Moon occurs when the moon is closest to Earth in its elliptical orbit (termed perigee) we call it a ‘supermoon’.”

For Slooh audiences, astronomers Paul Cox and Helen Avery will be providing commentary on this spectacular event.

The next supermoon will occur on January 31 and will be dubbed a Blue Moon as it will be the second of two full moons in one calendar month.

It will coincide with a total lunar eclipse as the Blue Moon will pass right through the Earth’s shadows to state a total eclipse of the moon during the nighttime hours on January 31.

Slooh added: “The total lunar eclipse will be visible from the western United States, the Pacific Ocean, Australia and parts of Asia.

“That moon just keeps on giving!”