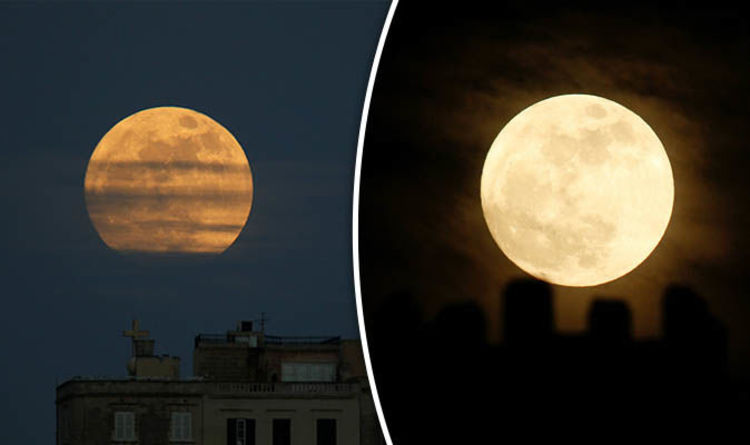 The peak comes hours after it reaches its perigee – its closest point to Earth for the month at 4.54pm EST (9.54pm GMT January 1).

NASA has said a supermoon can appear as much as 14 percent bigger and 30 percent brighter than when a full moon is at its farthest distance.

It is the second supermoon in a ‘supermoon trilogy’, the first supermoon appeared on December 3 2017 and the last in the series will appear on January 31.

The January 31 supermoon is the second full moon of January, making it a Blue Moon and it will occur during a total lunar eclipse.

Tonight’s full moon is known as a ‘Full Wolf Moon’ – a name coined by early Native American tribes as it was the time of year when hungry wolf packs howled outside their camps.

Where is the supermoon visible in the USA tonight?

The supermoon will peak in the USA during the late hours of New Year’s Day [January 1).

It will reach its peak at the following times:

For stargazers in New York City, the moon will rise in the east-northeastern sky at 4.34pm EST and stay up through the night, setting at 7.36am EST on January 2.

You can find out the times of the moonrise and moonset times in different time zones on timeanddate.com.

Supermoons happen when a full moon approximately coincides with the moon’s perigee or a point in its orbit at which it is closest to Earth.

In 2018, there will be one other supermoon on January 31 and it will be the second full moon of January, making it a Blue Moon and it will occur during a total lunar eclipse.

“The lunar eclipse on January 31 will be visible during moonset. Folks in the Eastern United States, where the eclipse will be partial, will have to get up in the morning to see it,” Noah Petro, a research scientist from NASA’s Goddard Space Flight Centre said.

There will be a total lunar eclipse on January 31 in North America, Asia, and Australia, among other places, which will turn the blue moon red.

Termites Love Global Warming So Much That They May Make It Worse, Says Study : ScienceAlert
These Are The Most Distant Star Clusters Ever Seen, And We Nearly Missed Them : ScienceAlert
The Tonga Eruption’s 50 Million Tons of Water Vapor May Warm Earth For Months to Come : ScienceAlert
We Just Got Our Closest View of Europa in 20 Years, And We Can’t Stop Staring : ScienceAlert
Diamond From 660 Kilometers Below Earth’s Surface Reveals a Water-Rich Environment : ScienceAlert