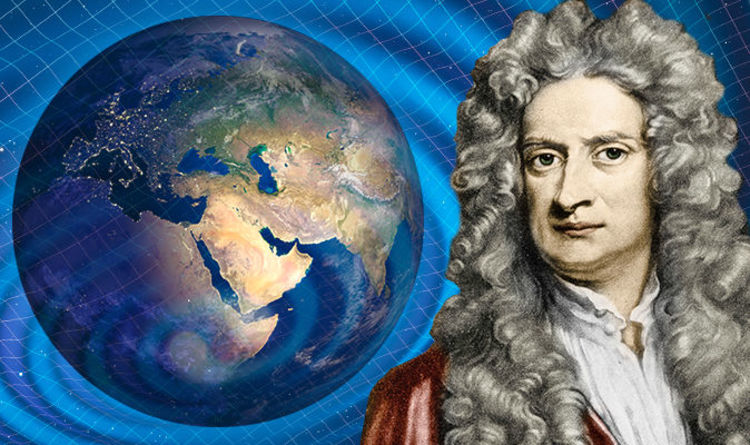 
The physicists are attempting to harness the power of Quantum Entanglement – a bizarre force which allows one particle to ‘talk’ to a mirror particle even if it is on the other side of the universe.

Quantum Entanglement is also believed to control gravity – and that interfering with, or switching-off, this entanglement could be the key to travelling mind-blowing distances in a fraction of a second.000

However, some fear interfering with gravity could lead to the kind of universal catastrophe thus far only seen in science fiction books.

Gravity has been seen as a basic force of the universe since Isaac Newton’s Philosophiæ Naturalis Principia Mathematica in 1687 – but it’s causes are only now beginning to be understood.

Jeremy Rys, is the founder and CEO of Hover Brothers, a research team looking at building a real, working warp drive.

The team have built on top-secret work carried out by Boeing’s Phantom Works in the early part of the century which attempted to create anti-gravity.

But Mr Rys now believes advances in quantum understanding and his team’s revolutionary PHOENIX theory will make a practical Star Trek like warp drive a reality within 20 years.

He said: “Right now in mainstream physics there is a massive revolution about to take place.

“Quantum entanglement somehow holds the key theory to quantum gravity and the physics community is about to discover how gravity really works.

“Project Hover is the pursuit of Warp-Drive technology, and the road to warp-space is paved with antimatter.

“Using PHOENIX Theory, we intend to completely reshape the world of physics with a whole new understanding of the true nature of Gravity, and develop revolutionary technologies in the process.

“The race is on because the first group to come up with a correct theory of quantum gravity via quantum entanglement will not only reveal the secret mechanism by which gravity operates they will also be able to turn it off and discover how to freely manipulate its direction and magnitude at will.

“We are on the verge of one of the most incredible breakthroughs in physics since Einstein.

“This new discovery promises to usher in a new golden age of technologies beyond our wildest dreams.”

Explaining the extremely complex technology he added that historically the atom was thought to be the most basic indivisible block of matter.

Later it was found atoms were composed of protons and neutrons, which were then found to be composed of quarks.

The PHOENIX team believe they have discovered the internal make-up of quarks and have named them Vertex.

Mr Rys said: “The Universe, its spacetime fabric and its matter content, is tied together by basic vertex combinations that evolve through their web of entangled information exchanges.

Since PhOENIX decodes the evolution of entanglement, gravity can thereby be reduced or enhanced, turned-on or turned-off through technology.

“Vertices are the most basic building blocks of the universe and what we should now be calling atoms.

“It’s time for us to step away from the blackboard and get into the laboratory.”

“We are now at a pivotal moment for demonstrating PHEONIX and it’s capabilities.

The team are using an open source platform for the technology but are looking for investors and backers.

We Just Got Our Closest View of Europa in 20 Years, And We Can’t Stop Staring : ScienceAlert
Engineers Gave a Car a Pair of Eyes to Make Future Roads Safer For Pedestrians : ScienceAlert
Hubble And Webb Pics Reveal DART Impact Was Even Bigger Than Expected : ScienceAlert
Deep Brain Simulation Could Alleviate OCD When Other Treatments Have Failed : ScienceAlert
A New FRB Signal Has Buzzed Nearly 2,000 Times in Just Two Months, Raising a Mystery : ScienceAlert