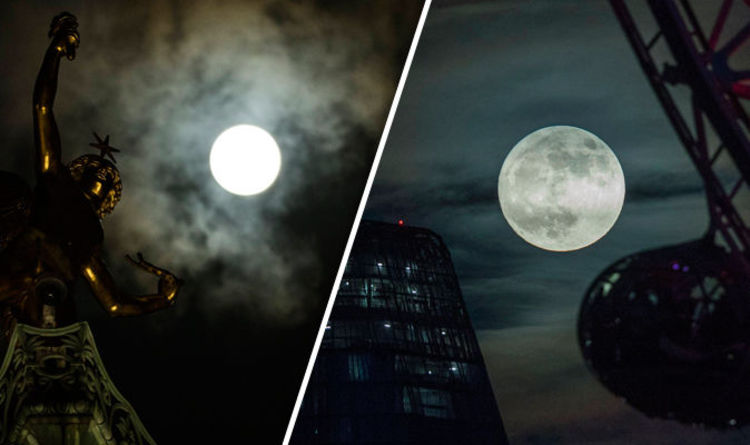 You can watch the live stream above to relive the magical experience of the New Year moon appearing in the sky as darkness fell.

Astrophysicist Gianluca Masi, who provided live commentary from Rome, said that the supermoon was seven per cent bigger and slightly brighter than an average full moon.

He said: “These differences are small, only experienced observers can possibly note them, but they add charm to the event, a precious opportunity to admire our natural satellite in the night sky context, an increasingly overlooked and forgotten landscape.”

Robotic telescopic service Slooh also pointed its telescopes at the supermoon last night. You can watch a replay below.

Slooh said: “We’ve been lunar lucky lately and are smack in the middle of a Supermoon Trilogy.

“December 3rd’s Supermoon will be followed by one that falls on the first day of 2018 – a New Year’s Supermoon!

“The third part of the trilogy will arrive on January 31st with a Blue Supermoon Lunar Eclipse.”

The supermoon was also pictured rising behind other iconic locations such as the London Eye in London and over the the Genie de la Bastille in Paris.

The so-called supermoon phenomenon takes place when the moon is at its closest point to Earth in its astronomical cycle.

The first full moon of the year is named the Wolf Moon because wolves tend to howl more during the mating season in the early part of the year.

The Wolf Moon name comes from Native American tribal tradition while other names for the moon include Old Moon, Ice Moon and Snow Moon.

Hubble And Webb Pics Reveal DART Impact Was Even Bigger Than Expected : ScienceAlert
Ancient Burial of a Young Girl Shows How We Carried Our Babies 10,000 Years Ago : ScienceAlert
Engineers Gave a Car a Pair of Eyes to Make Future Roads Safer For Pedestrians : ScienceAlert
A Rare Condition Makes Hair Truly Untamable, All Thanks to These Genes : ScienceAlert
We Just Got Our Closest View of Europa in 20 Years, And We Can’t Stop Staring : ScienceAlert