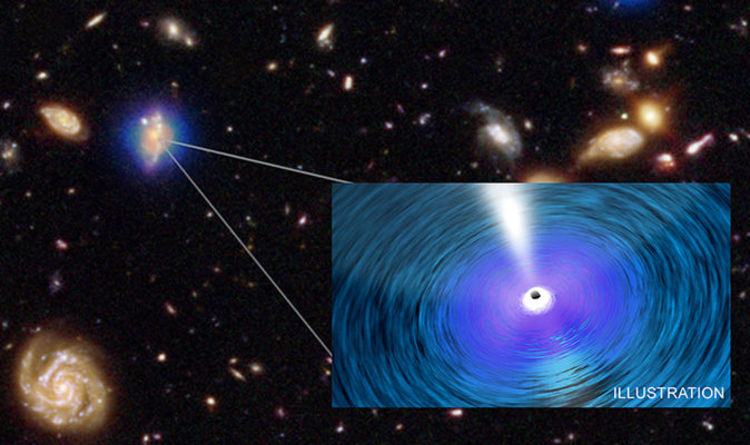 
At the centre of most galaxies lies a supermassive black hole – bigger than standard versions by hundreds or thousands of times.

Supermassive black holes, it is believed, are essential to early galaxy formation as their intense gravitational pull helps keep everything together.

Scientists had believed supermassive black holes grew at roughly the same speed as the stars forming around them, but new research has shown that they are in fact outgrowing their host galaxies.

In two massive galaxies, the researchers of a pair of separate studies found black holes grow much faster than those in smaller galaxies.

Guang Yang of Penn State who led one of the two studies said: “We are trying to reconstruct a race that started billions of years ago.

“We are using extraordinary data taken from different telescopes to figure out how this cosmic competition unfolded.”

The researchers studies galaxies at distances of 4.3 to 12.2 billion light-years from Earth, believing the ratio of black hole growth rate and star formation was consistent in all galaxies.

However, for galaxies which had about 100 billion solar masses worth of stars, the ratio of black hole growth rate is about 10 times higher.

“Maybe massive galaxies are more effective at feeding cold gas to their central supermassive black holes than less massive ones.”

Mar Mezcua, of the Institute of Space Sciences in Spain, and her colleagues studied 72 galaxies within about 3.5 billion lightyears from Earth, and found results consistent with Mr Yang’s study.

Ms Mezcua said: “We found black holes that are far bigger than we expected.

“Maybe they got a head start in this race to grow, or maybe they’ve had an edge in speed of growth that’s lasted billions of years.”

Co-author Julie Hlavacek-Larrondo of the University of Montreal said: “We know that black holes are extreme objects, so it may not come as a surprise that the most extreme examples of them would break the rules we thought they should follow.”