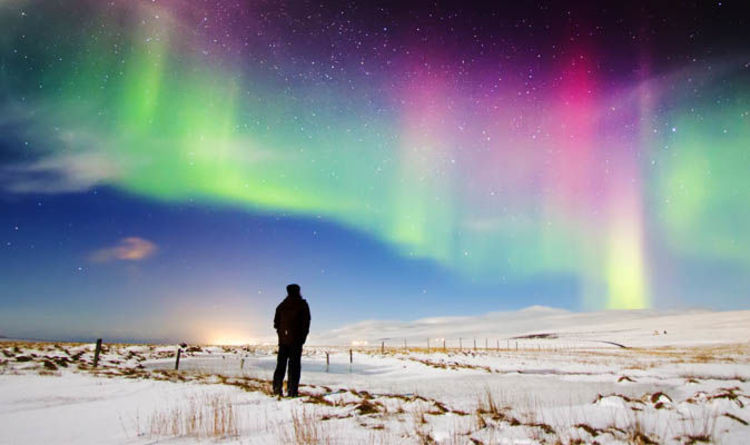 
A blast of charged particles ejected from the sun on Sunday have interacted with Earth’s magnetic field and atmosphere on Thursday night.

The Aurora Borealis, as seen in the far reaches of the Northern Hemisphere painted sky red, green and violet over Canada, north Europe and parts of the UK.

Those who unfortunate enough to miss the spectacle, can re-live it thanks to the webcam footage captured below.

The webcam footage of the Northern Lights was film on Thursday night at the Canadian Churchill Northern Studies Centre in Churchill, Manitoba.

According to the centre, Churchill is one of the best places in the world to witness the dancing lights.

The Churchill Centre said: “Churchill lies directly beneath the Auroral Oval in the Northern Hemisphere.

“With auroral activity occurring on over 300 nights a year, Churchill offers unique access to this mysterious and compelling phenomena.

“The view from directly beneath the Aurora shows dazzling bands of light with huge depth, and often with colour! Be assured that no experience can match the real light show in the arctic sky.”

The Aurora Borealis is caused by the charged particles ejected in a solar storm interacting with our atmosphere.

When the particles enter Earth’s magnetic field they excite oxygen and nitrogen particles, causing them to change hue.

The Churchill Centre said: “There are all sorts of gases in the atmosphere. It is the different gases which cause the Aurora to change colour.”

NASA also explained: “Aurora are one effect of such energetic particles, which can speed out from the sun both in a steady stream called the solar wind and due to giant eruptions known as coronal mass ejections or CMEs.

“After a trip toward Earth that can last two to three days, the solar particles and magnetic fields cause the release of particles already trapped near Earth, which in turn trigger reactions in the upper atmosphere in which oxygen and nitrogen molecules release photons of light.

“The result: the Northern and Southern lights.”

Northern Typically take on a characteristically green hue, but decoding on the composition of the air, will range from yellow all the way to violet.

The number of visible Northern Lights is bound to decrease in the next two to three years, due to the sun nearing the end of its 11-year sunspot cycle.

The sun reached peak activity of coronal mass ejection in 2014, but will eventually reset.

Scans of Mummified ‘Golden Boy’ Reveal He Was Covered in Magical Protections : ScienceAlert
Bacteria Can Use Plastic Waste as a Food Source, Which Isn’t as Good as It Sounds : ScienceAlert
Study of 500,000 Medical Records Links Viruses to Alzheimer’s Again And Again : ScienceAlert
An Expert Explains Why The Radioactive Water Stored at Fukushima Should Be Released : ScienceAlert
JWST Has Found Life’s Elemental Building Blocks in The Depths of Darkest Space : ScienceAlert