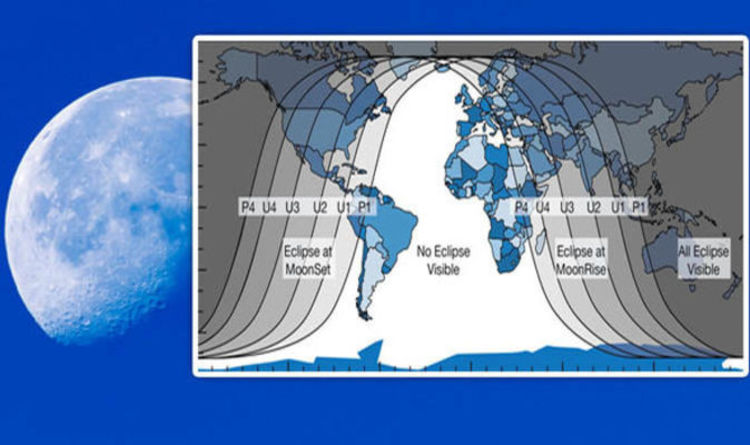 
The triple lunar event will be visible on Wednesday January 31 as a blue moon, super moon and total eclipse blood moon light up the skies.

But only select parts on Earth’s nightside will have a chance to see all three at once, and most countries in the Western Hemisphere will miss out on the lunar events.

According to NASA, large swathes of the US, Australia, Asia and the Pacific will wake up tomorrow just in time to see the eclipse happen.

The American space agency said: “If you live in the western part of North America, Alaska, and the Hawaiian islands, you might set your alarm early the morning of Wednesday, January 31 for a lunar trifecta: a pre-dawn ‘super blue blood moon’.”

Because the moon is roughly four times smaller than Earth, the whole event could last up to five hours.

When to see the total lunar eclipse tomorrow?

US residents living in North America, Alaska or Hawaii, will start to see the eclipse occur before sunrise on Wednesday.

“For the Washington, DC area, civil twilight starts at 6:47 AM, just as the partial eclipse begins, when the Moon will be only about 4 degrees above the horizon in the west-northwest.

“With the Moon and Sun opposite each other, the Moon will set at the same time the Sun rises (at 7:15 AM EST).”

Further up north in western Canada, mostly British Columbia and the northwest Territories, residents will see the eclipse from about 3.48am EST (8.48am GMT).

In the east of Canada, locals will still be treated to a partial eclipse which will begin around 5.51am EST (10.51am EST).

In Australia, the eclipse will begin between 9pm and 11pm AEDT (10am and 12pm GMT) on Wednesday, and will end in the early morning hours on February 1.

The eclipse will kick off at 10.18pm AEDT (11am GMT) in Southern Australia, Victoria and Tasmania.

Further out in the Pacific Ocean, the eclipse will reach totality over Japan at 11.07pm JST (2pm GMT) on Wednesday.

Above is a comprehensive NASA map detailing the eclipse’s path across the globe tomorrow.

Unfortunately the eclipse will not appear over the UK, parts of West Europe, Africa and South America.

However countries not covered by the eclipse can still look forward to the lunar spectacle thanks to NASA’s online stream of the event.

The US space agency will stream live feeds from its telescopes at the Armstrong Flight Research Center in Edwards, California; Griffith Observatory in Los Angeles; and the University of Arizona’s Mt. Lemmon SkyCenter Observatory.

These Are The Most Distant Star Clusters Ever Seen, And We Nearly Missed Them : ScienceAlert
A Stunning New 3D Model of The Cat’s Eye Nebula May Help Us Solve Its Mysteries : ScienceAlert
Shimmering ‘Lakes’ Under The South Pole of Mars Might Be Something Else Entirely : ScienceAlert
Termites Love Global Warming So Much That They May Make It Worse, Says Study : ScienceAlert
Ancient Maya Cities Appear to Have Been Riddled With Mercury Pollution : ScienceAlert