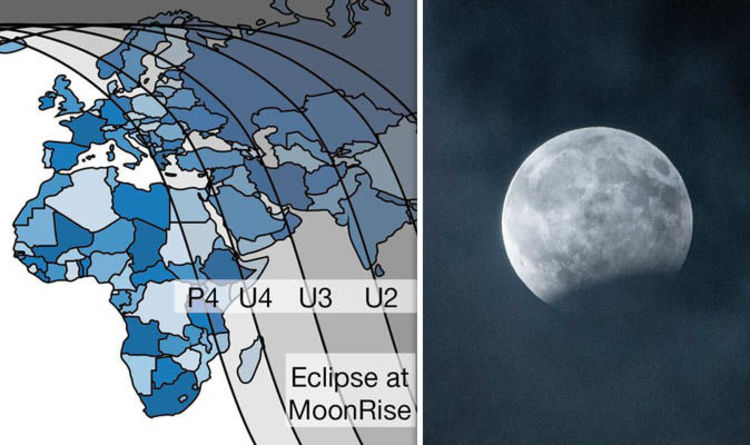 When is the Super Blue Blood Moon eclipse?

The super blue blood moon eclipse combines four separate astronomical events on the same night, but their spread is limited to certain parts of the world.

Unfortunately for UK viewers, the January 31 eclipse will avoid the Western Hemisphere, moving instead over swathes of North America, Asia, the Pacific and Australia.

Dr Gregory Brown, astronomer at the Royal Observatory Greenwich, underlined that the full spectacle will not be visible from the UK.

He said: “Unfortunately form the United Kingdom the lunar eclipse is not visible, so for people living here whether it is or isn’t a blue moon, this coming full moon will most likely remain grey.”

The eclipse will kick off on Earth’s nightside around 10.51am GMT (5.51am EST) before it sets on a journey to the East.

But the UK will still get to witness the blue moon and supermoon, which according to NASA could be up to 14 percent larger and 30 percent brighter.

The spectacular blue moon will appear over the UK around 1.26pm according to Royal Observatory Greenwich.

But the best time to view the moon will be in the morning hours on Thursday February 1, around 2am GMT.

You will still have the opportunity to see the eclipse as it unfolds thanks to NASA’s live stream of the event. Click here to find out how to watch the eclipse 2018 live stream.

The next total lunar eclipse visible from the UK will occur on July 27 2018.

Eclipse 2018: The Super Blue Blood Moon eclipse will not be visible from the UK

What is a Lunar Eclipse?

A lunar eclipse occurs whenever the moon passes through Earth’s shadow and disappears from sight, either partially or completely.

During tomorrow’s eclipse the sun and earth will perfectly align to cast a shadow onto the surface of the moon.

An total eclipse can usually last up to five hours because Earth is four times larger than its satellite.

The next lunar eclipses will take place on:

What is the Supermoon?

The non-scientific term is popularly used by astronomers and amateurs alike to describe conditions in which the moon approaches its perigee, or closest distance from Earth.


Lyle Tavernier from NASA’s Jet Propulsion Lab explained: “Full moons can occur at any point along the Moon’s elliptical path, but when a full moon occurs at or near the perigee, it looks slightly larger and brighter than a typical full moon.

“That’s what the term ‘supermoon’ refers to.

“Because supermoon is not an official astronomical term, there is no definition about just how close to perigee the full moon has to be in order to be called ‘super’.” 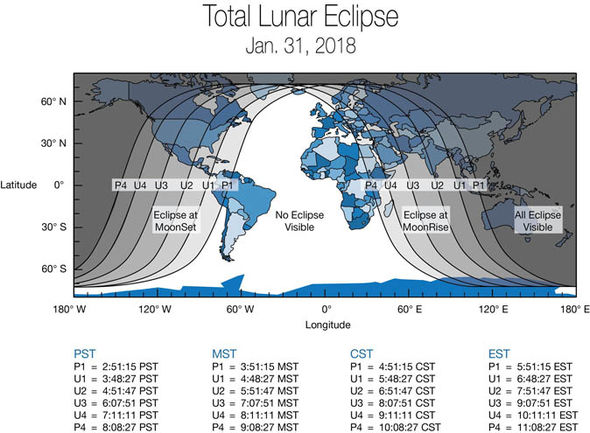 Eclipse 2018: The lunar eclipse will be visible on Earth’s nightside in the Eastern Hemisphere

What is  Blue Moon?

Despite what its name might suggest, the moon does not actually change colour. Instead the term describes the second full moon to rise in one calendar month.

This year’s blue moon is particularly special because it is the first to coincide with a total eclipse in over 150 years.

According to NASA, a blue moon only occurs every two-and-a-half years or so, which makes it a rare event.

Observatory Greenwich added: “Normally blue moons come only about every two or three years. In 2018, unusually, we are getting two blue moons in one year and only two months apart – and one is a lunar eclipse!

During the eclipse the moon will take on a reddish hue, giving birth to the term blood moon.

When Earth’s shadow blocks out direct sunlight, some of the sun’s rays still pass through the atmosphere and are scattered through a process known as Rayleigh scattering.

Rayleigh scattering is responsible for making blue eyes and the sky appear blue, as well as turning the moon red during an eclipse.

The Royal Observatory said: “The colour of the Moon during totality will depend on the global state of dust in the Earth’s atmosphere – sometimes red or possible virtually invisible.

Diamond From 660 Kilometers Below Earth’s Surface Reveals a Water-Rich Environment : ScienceAlert
Watch a Tiny Robot Blob Transform Into Even Tinier Bits to Squeeze Through Cracks : ScienceAlert
Fossil-Filled Australian Caves May Be 500,000 Years Older Than We Thought, Study Finds : ScienceAlert
A Stunning New 3D Model of The Cat’s Eye Nebula May Help Us Solve Its Mysteries : ScienceAlert
Superconductivity Model With 100,000 Equations Now Contains Just 4 Thanks to AI : ScienceAlert