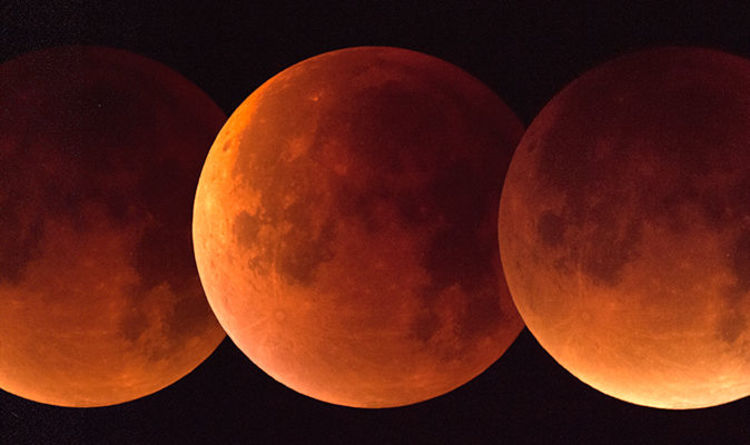 This will be the final supermoon in NASA’s ‘supermoon trilogy’ in recent weeks.

The first one was December 3 last year followed by the second on January 1.

What is a supermoon?

A supermoon occurs when a full moon coincides with its closest approach during orbit to Earth, known as a perigee.

The term was coined by astrologer Richard Nolle in 1979.

During the phenomenon, the full moon appears about 14 percent and 30 percent brighter that it would during regular full moons.

Noah Petro, a research scientist from NASA’s Goddard Space Flight Center, said:  “The supermoons are a great opportunity for people to start looking at the Moon, not just that once but every chance they have!”

What is a super blue blood moon?

January 31 is not only a supermoon but a super blue blood moon with a lunar eclipse.

The space agency said: “With the total eclipse, it’ll be a royal spectacle indeed: a ‘super blue blood’ Moon.

Despite the name, blue moons aren’t actually blue but white.

The name is given to the second full moon in a calendar month. They’re very rare, happening on average only every two years.

On January 31, the blue moon will coincide with a lunar eclipse and as it does so, it will briefly take on a reddish hue – the blood moon.

The best place to see it will be in central and eastern Asia, Indonesia, New Zealand and Australia, according to Space.com.

Unfortunately there won’t be viewing opportunities in the UK as the eclipse – taking place at about 1pm GMT will only be visible before sunrise or after sunset.

Sadly, if you do miss it then you’ll have some time to see something this spectacular again.

Amazing New Fossils Provide Earliest Known Traces of The Evolution of Our Jaws And Limbs : ScienceAlert
Diamond From 660 Kilometers Below Earth’s Surface Reveals a Water-Rich Environment : ScienceAlert
Fossil-Filled Australian Caves May Be 500,000 Years Older Than We Thought, Study Finds : ScienceAlert
We Just Got Our Closest View of Europa in 20 Years, And We Can’t Stop Staring : ScienceAlert
A New FRB Signal Has Buzzed Nearly 2,000 Times in Just Two Months, Raising a Mystery : ScienceAlert