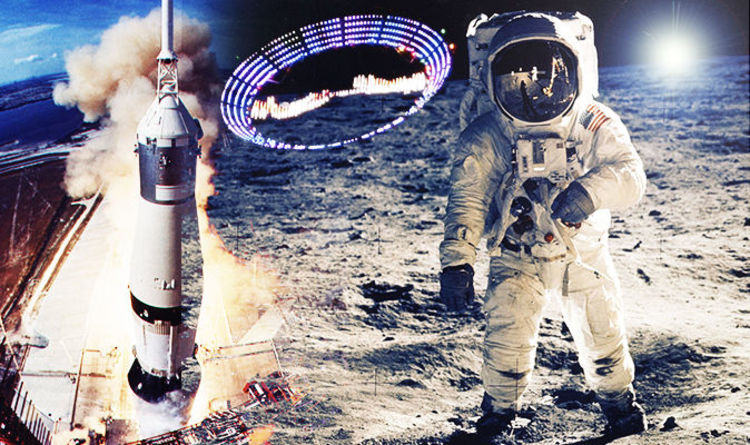 
The mission saw the first two people land on the moon – Neil Armstrong and Buzz Aldrin – in 1969.

However, prior to landing on the lunar surface, the team, which also included Michael Collins, orbited the moon in their spacecraft.

The astronauts aboard spotted strange craters, which startled them and prompted strange discussions.

However, the terminology the astronauts used has people believing they spotted evidence of aliens.

Mr Collins replied: “Boy, there must be nothing more desolate than to be inside some of these craters, these conical ones”

Mr Armstrong continued: “People that live in there probably never get out.”

Mr Collins then exclaimed: “Oh God, look at that Moltke (crater); he’s my favourite. Look at that son of a bitch.

“You see all those roads – triangular roads leading right past him?”

YouTubers who wrote on a video of the audio from the mission were convinced that the talks between the astronauts is proof they spotted alien activity.

HipHop Geek wrote: “So crazy all this proof we have and people still refuse to even think about the concept of other intelligences out there.”

Christopher Phillips added: “You’d have to be really naïve to believe that there isn’t a NASA (and) military cover-up of UFOs & aliens. There is way too much circumstantial evidence that we are not alone in this solar system.”

However, others were not so convinced.

Saved2theLight gave a logical explanation: “The astronauts had no clue. They were juvenile humans in an environment superimposing their own biases into what they saw. Wake up there is nothing out there.”

Flip Godfrey was slightly more blunt with their response, simply writing: “Yeah… This is bulls***.”

A Rare Condition Makes Hair Truly Untamable, All Thanks to These Genes : ScienceAlert
Hubble And Webb Pics Reveal DART Impact Was Even Bigger Than Expected : ScienceAlert
Amazing New Fossils Provide Earliest Known Traces of The Evolution of Our Jaws And Limbs : ScienceAlert
Watch a Tiny Robot Blob Transform Into Even Tinier Bits to Squeeze Through Cracks : ScienceAlert
Fossil-Filled Australian Caves May Be 500,000 Years Older Than We Thought, Study Finds : ScienceAlert