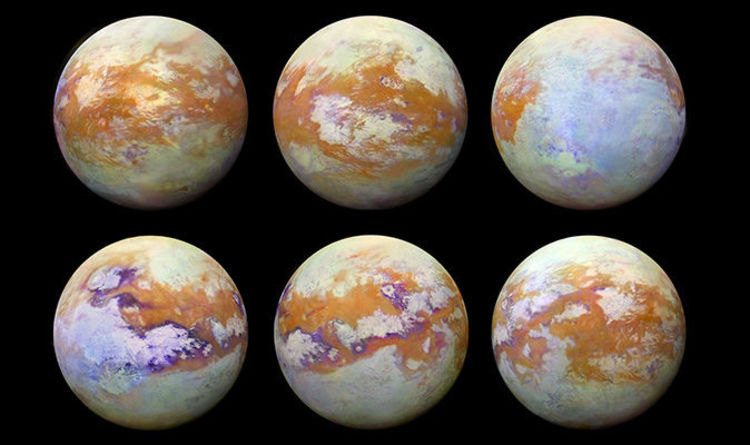 The pictures have been constructed from 13 years’ worth of data from US space agency NASA’s Cassini spacecraft, offering the best insight yet into the mysterious moon’s surface.

Titan’s thick atmosphere, mainly consisting of nitrogen, with smaller amounts of methane, hydrogen and traces of other gases, is impossible to see through.

However infrared detectors enabled the probe to peer down and “see” the surface, complete with rolling dunes and seas of methane.

Cassini ended its mission last September, plunging into the gas giant to prevent the risk of crashing on Titan and potentially contaminating it with microbes from Earth – but data is still being processed.

Talking to New Scientist magazine, Ralph Lorenz of Johns Hopkins University in Maryland said: “A mission and its scientific legacy doesn’t end when the spacecraft stops.

“These new images are a good example of the sort of cleaner, more uniform and comprehensive product we can make by consolidating all the data from Cassini’s epic mission.”

Titan – the second largest moon in the solar system after Jupiter’s Ganymede – is a common subject for science fiction writers imaging places where life might thrive away from our own planet.

It is 50 percent larger than our own moon and is the only one known to have a dense atmosphere.

It is also the only object in space, other than Earth, where clear evidence of stable bodies of surface liquor has been found.

And scientists are drawn to it because the types of complex chemicals necessary for living organisms exist in abundance.

NASA is currently considering a new mission, entitled Dragonfly mission, whereby a flying drone would “hop” around its surface.

Mr Lorenz added: “The rich and varied surface composition shown in these images underscores the value of mobility in future Titan exploration.”

If Dragonfly secures funding from NASA, it would launch in 2025, arriving at Titan five years later.

Not everyone agrees that Titan is the first place to look for life though.

Other candidates for exploration are fellow Saturnian moon Enceladus and Jupiter’s Europa.

Both are thought to have huge sub-surface oceans of water.

NASA’s Janet Porco, who worked on the Cassini mission, last month tipped Enceladus, saying: “We know it’s the best, and it stands the greatest chance of making that next big step.”

Ancient Burial of a Young Girl Shows How We Carried Our Babies 10,000 Years Ago : ScienceAlert
Control of a 6-Qubit Processor in Silicon : ScienceAlert
Secret Clues in Tutankhamun’s Tomb Reignite The Idea That Nefertiti Is Hidden Nearby : ScienceAlert
Shimmering ‘Lakes’ Under The South Pole of Mars Might Be Something Else Entirely : ScienceAlert
A Rare Condition Makes Hair Truly Untamable, All Thanks to These Genes : ScienceAlert