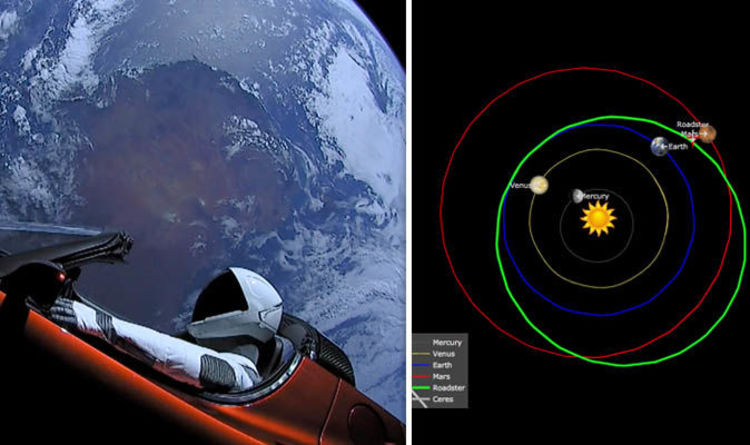 
The sports car speeding through space could come close to crossing paths with Earth again towards the end of 2020 it has been revealed.

The cherry-red electric Tesla Roadster, which blasted off into Space on February 6 onboard the Falcon Heavy rocket, is still soaring near to Earth.

But in April this year the Roadster will swing away towards Mars, on an orbital path that will take it beyond the Red Planet and close to the astroid belt.

Thereafter Starman will complete a trip around the solar system before flying in-between Earth and Mars in two year’s time, according to the WhereIsRoadster.com tracker.

But the good news for those below is that the odds of the Tesla ever actually crash landing back on Earth are pretty small – about 6 percent in fact.

The vehicle will continue to orbit the star at the heart of the solar system for another million years before it crashes into anything.

Orbital dynamics experts Hanno Rein, Daniel Tamayo and David Vokrouhlicky, outlined this in their study of the car’s position.

In their research paper, titled The random walk of cars and their collision probabilities with planets, the scientists underlined that there is no genuine threat from Starman.

The three experts underlined that it is nigh impossible to precisely chart the Roadster’s position as it sails across the vast expanse of space.

Lead author of the study, Mr Rein, said: “Earth is the most likely place the car will crash, followed by Venus, and then the sun.”

According to the expert, the Roadster will come “relatively close” to its home planet every 30 years, and its trajectory will shift slightly every time.

The Roadster is expected to make it next close encounter with Earth in 2091, when it approaches at a distance similar to that between the planet and its moon.

The three researchers from the University of Toronto ran countless simulations to come to the conclusion that there is a 6 percent chance of the Roadster crashing into Earth and a 2.5 percent chance of hitting Venus.

Mr Rein said:  “We’ve not seen any single collision with Mars in 240 simulations, though we continue to run them and see what happens.

“The likely outcome is that it will crash, in tens of millions of years, into Earth or Venus or the sun.”

After its third flyby of Earth, the planet’s gravity will cause the unusual spacecraft to shoot off on a more chaotic trajectory.

The Tesla Roadster’s launch into space earlier this month was heralded as breakthrough moment in the space race to Mars.

In the wake of the Falcon Heavy launch, SpaceX founder Elon Musk mused in awe: “Crazy things can come true.

“When I see a rocket lift off, I see a thousand things that could not work, and it’s amazing when they do.”

Scientists Create Shapeshifting Humanoid Robot That Can Liquefy And Reform : ScienceAlert
Mysterious ‘Zone of Uncertainty’ Inside The Brain Reveals a Surprise : ScienceAlert
This Rembrandt Has Been Hiding a Surprising Secret For Centuries : ScienceAlert
Six Minutes of Intense Exercise Boosts a Crucial Molecule in Your Brain : ScienceAlert
One Simple Idea Makes It Much Easier to Manage Your Weight Over Time : ScienceAlert