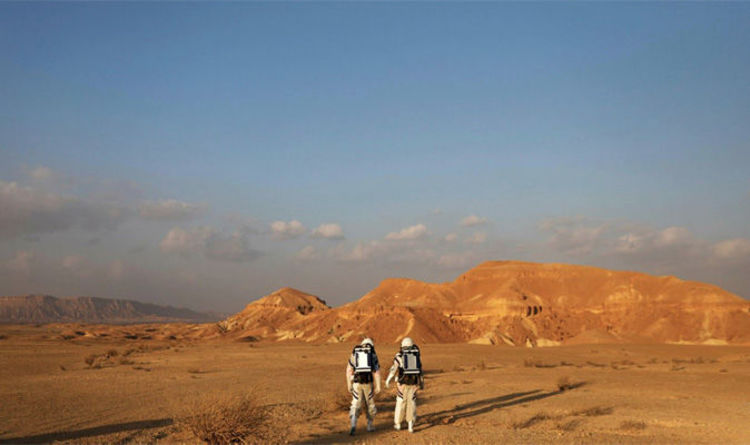 
A team of six Israeli researchers spent four days in the Negev desert, cut off from society, where they simulated conditions to those on Mars.

The desert was the perfect place to complete a mock-Mars mission as it is similar in aridity, geology and appearance to the Red Planet.

During their stay, the researchers were kitted out with full astronaut suits whenever they had to leave their pod they were situated in.

The ‘astronauts’ also ate food that would only be able to be transported to Mars in the first place, such as non-perishable food that comes in capsules, and lived in tight quarters during the project which was dubbed D-Mars.

Participant Guy Ron, a nuclear physics professor from the Hebrew University in Jerusalem, said: “D-Mars is half about the research, and the other half is about the outreach.

“A major part of this project is getting public interest and getting students interested in space.”

Dr Hillel Rubinstein, the field commander and head of the Israeli mission, described D-Mars as “a special and exciting experience, an amazing team.”

Nasa has previously said that it aims to get the first humans to Mars somewhere between 2030 and 2040.

Elon Musk’s SpaceX has the financial clout to reach Earth’s next door neighbour and is aiming to get people to the Red Planet by around 2030, with the first people there being tasked with beginning to build a new civilisation.

Initial estimates suggest it would take humans around nine months to get to Mars.

During that time, astronauts would be constantly bombarded from radiation from the sun, whereas people on Earth are protected by the planet’s atmosphere.