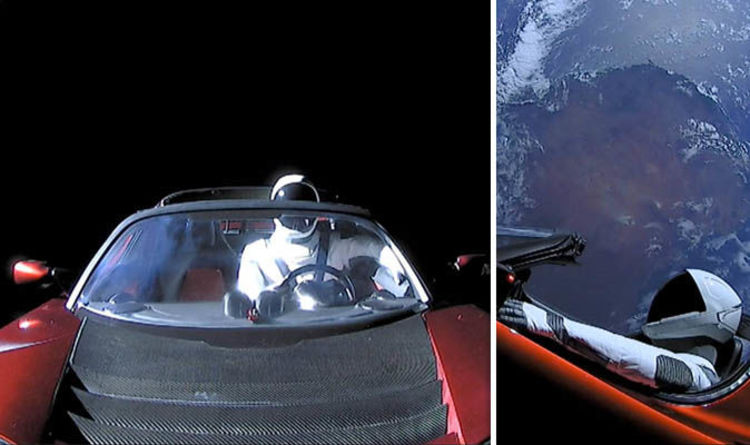 
Elon Musk’s original 2008 sports car is currently on a long elliptical tour of the Sun, extending nearly 390 million kilometres (243 million miles) – some 2.61 times the average distance between Earth and the Sun, according to Space.com.

His sports car – acting as the payload – was blasted into space by the Heavy Falcon rocket on February 6 from the Kennedy Space Centre in Cape Canaveral, Florida.

SpaceX’s launch of the world’s most powerful rocket, measuring 23-storeys high, was cheered on by thousands of nearby well-wishers.

Elon Musk shared the last photograph of Starman at the wheel of the Tesla Roadster a few hours after it successfully launched.

Can you still watch the Tesla Roadster and Starman?

Elon’s Roadster is now 1.6 million km from Earth, outside the Earth-Moon System’s Hill sphere and firmly in solar orbit.

A live stream initially ran for a few short hours after the Tesla reached orbit until its battery life ended.

While you cannot currently watch a live-stream of the Tesla Roadster, there is still a final chance to see it and the Starman before they completely disappear from view.

The Virtual Telescope Project (VTP) is going to lifestream the car tomorrow, on Valentine’s Day, before it disappears from the realm of telescopes completely.

VTP’s website says: “The Virtual Telescope Project and Tenagra Observatories bring to you a once-in-a-lifetime opportunity: see the Elon Musk0s Tesla Roadster LIVE, while it sinks into the deep space. We will use our telescopes for this. Save the date!”

The free event is open to everyone and starts at 12.15pm UTC

Why did Elon Musk launch the Tesla into space?

“Of course, anything boring is terrible, especially companies, so we decided to send something unusual, something that made us feel.”