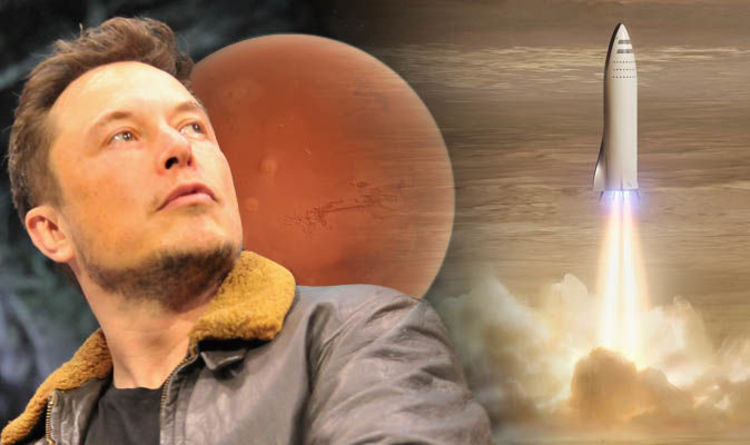 
Just a month after SpaceX successfully launched an electric Tesla Roadster sports car into orbit around the sun, the company says it is now ready to reach Mars.

Speaking at the South by Southwest (SXSW) conference in Austin, Texas, Mr Musk unveiled his audacious timeline for reaching the distant planet.

The first Mars test flights could be ready as soon as the first half of next year, the tech entrepreneur teased.

He said: “It’s difficult, dangerous, there’s a good chance you will die, excitement for those who survive, that kind of thing.”

Elon Musk told a crowd of space enthusiasts the BFR – Big Falcon Rocket or Big F*****g Rocket in reference to the Doom video game series – will be ready by 2019.

He said: “We want to make sure there’s enough of a seed of civilisation somewhere else to bring civilisation back and perhaps shorten the length of the dark ages.

“I think that’s why it’s important to get a self-sustaining base, ideally on Mars, because it’s more likely to survive than a moon base.”

Mr Musk now conceded his launch timeline is “optimistic” but remained positive the BFR, which is currently under construction, is “evolving rapidly”.

He said: “Sometimes my timelines are a little… you know.”

The rocket manufacturer aims to deliver the first ever cargo payload to Mars by 2022, followed by a human crew shortly after in 2024.

The BFR rocket will be powered by an impressive array of 31 monstrous Raptor engines.

READ MORE: How long will it take SpaceX to reach Mars?

This new generation of rockets developed by the private company will put SpaceX one step closer towards full interplanetary travel.

In the vein of the previous generations of Falcon rockets, the BFR will be fully reusable.

Mr Musk was also positive a successful Mars mission will push other companies to step forward and achieve similar results.

He said: “They currently don’t think it’s possible so that if we show them that it is, then I think that they will up their game and they will build interplanetary transport vehicles, as well.”

But for the time being the cost of reaching Mars, appears to be out of reach for the majority of people down on Earth.

SpaceX estimates the cost of reaching the Red Planet sits in the $5million to $6million range.

But there is a silver lining. SpaceX boasted a successful mission will pave the way for establishing a “thriving city and eventually a self-sustaining civilisation on Mars”.

Towards that goal, Mr Musk asked for support and goodwill from those who would like to see true space travel happen in their lifetimes.

He jokingly added: “I think Mars should really have great bars. A Mars bar.”

Dogs Can Be Aggressive For Lots of Reasons, And One of Them Is You : ScienceAlert
Mysterious ‘Zone of Uncertainty’ Inside The Brain Reveals a Surprise : ScienceAlert
This Physicist Says Electrons Spin in Quantum Physics After All. Here’s Why : ScienceAlert
‘Funky Worm’ Fossil Helps Explain The Mysterious Origins of Amphibians : ScienceAlert
Study of 500,000 Medical Records Links Viruses to Alzheimer’s Again And Again : ScienceAlert