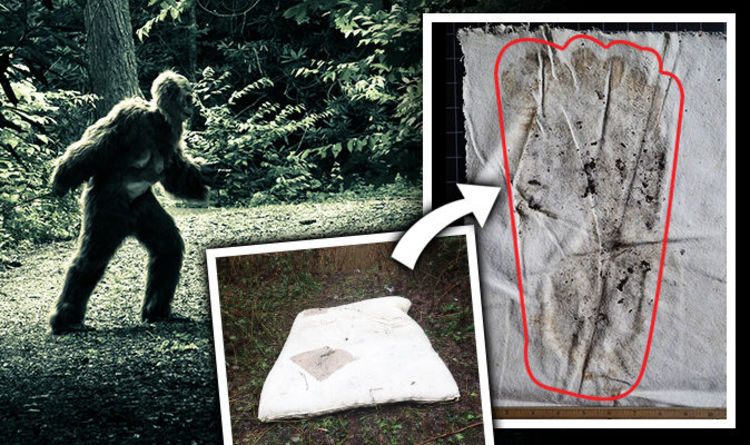 
Cliff Barackman, who has been on the trail of the mythical beast for 20 years, recovered giant footprints from an abandoned mattress in the US wilderness.

Photos show the barefooted prints, measuring an enormous 13 inches long by five-and-a-half inches wide, impressed upon the fabric in mud.

And the distance between one footprint and another, heel to heel, was a monstrous 48 inches – suggesting a truly giant gait.

Mr Barackman, 47, said the prints were found in Alderwood State Wayside Park, Oregon – a place where Bigfoot sightings are common.

“There is a long history of reports from the surrounding location,” he said.

“I have a contact that lives two miles from where the prints were, and he has heard sasquatches several times over the years of living there.

“He is also aware of numerous sightings from the surrounding woods.”

There’s no obvious reason why a human would be barefoot in these woods either.

“It is a very rural area,” said Mr Barackman. “That park is surrounded by miles and miles of mixed woods and farmland in the foothills of the Coast Range of Oregon.”

The width of the prints is nearly 40 percent beyond human dimensions, he added.

“The prints are between 13 and 13.5 inches long, which is pretty long, but it’s the width that makes these not human,” he said.

“These are well beyond the width of a human’s foot of that length.”

Cliff, who’s recently appeared in the Animal Planet documentary series, Finding Bigfoot, believes that the prints are the real deal.

“We can never know for sure if a sasquatch made them or not, but they do appear to be authentic,” he said.

“They are certainly a unique piece of evidence in that this sort of thing has never been obtained before.”

Newly Discovered Fossil Reveals Hundreds of Teeth ‘Never Seen Before in a Pterosaur’ : ScienceAlert
Mysterious ‘Zone of Uncertainty’ Inside The Brain Reveals a Surprise : ScienceAlert
Sword Mistaken For Replica Is Actually An Ancient 3,000-Year-Old Weapon : ScienceAlert
An Iceberg The Size of London Has Broken Free From Antarctica Ice Shelf : ScienceAlert
Viagra Linked to Much Lower Risk of Death in Men, But Questions Remain : ScienceAlert