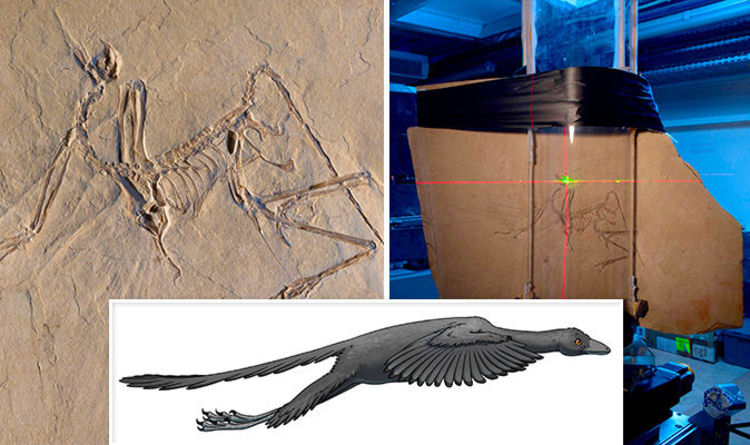 
New fossil analysis of the Jurassic dinobird Archaeopteryx shows the winged-beast would not have been able to fly long distances and would have tired very quickly.

Scientists discovered that it would have only used its power of flight for short bursts and distances, most likely to escape dangerous situations.

The Archaeopteryx, which translates as ‘Ancient Wing’, would not have been able to glide or soar either.

Researchers at the European Synchrotron facility in Grenoble, France, (ESRF) used powerful X-ray beams to confirm the discovery that the dinosaur, which lived 150 million years ago, flew properly, rather than hopping from tree to tree.

Lead researcher Dennis Voeten, from ESRF, said: “We immediately noticed that the bone walls of Archaeopteryx were much thinner than those of earthbound dinosaurs but looked a lot like conventional bird bones.

“Data analysis furthermore demonstrated that the bones of Archaeopteryx plot closest to those of birds like pheasants that occasionally use active flight to cross barriers or dodge predators, but not to those of gliding and soaring forms such as many birds of prey and some seabirds that are optimised for enduring flight.”

The Archaeopteryx was a small dinosaur, comparable in size to a modern day magpie.

Scientists had originally thought that the small dino was actually one of the first birds, but it turned out to be a flying dinosaur.

Nor is it an ancestor of modern birds.

While birds are some of the closest living relatives to dinosaurs – for example a chicken is surprisingly one of the closest relatives to the fearsome tyrannosaurus rex – the Archaeopteryx actually represents a dead end in an evolutionary tree, meaning it was the last of its kind.

This Species of Carnivorous Plant Evolved Into a Toilet And Is Now Winning at Life : ScienceAlert
Sword Mistaken For Replica Is Actually An Ancient 3,000-Year-Old Weapon : ScienceAlert
Dozens in 7,000 Year Old Mass Grave Were Carefully Decapitated After Death : ScienceAlert
Hypertension Drug Shown to Extend Lifespan And Slow Aging in Animals : ScienceAlert
This Rembrandt Has Been Hiding a Surprising Secret For Centuries : ScienceAlert