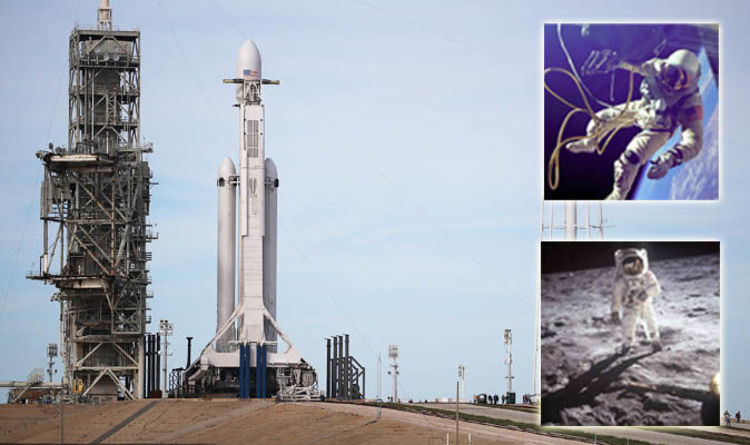 
Built by Elon Musk’s SpaceX company, the Falcon Heavy is the most powerful rocket to blast off from Earth since NASA’s Atlas 5.

The spacecraft is due to launch from Florida at about 7.50pm this evening (2.50pm local time), carrying a Tesla Roadster – also owned by the billionaire.

Ahead of the launch SpaceX said: “When Falcon Heavy lifts off, it will be the most powerful operational rocket in the world by a factor of two.”

On the day of the historic launch, here is a look back at three of the most famous programs in the history space travel.

What was the Mercury space program?

Project Mercury ran from 1958 and 1963, and was the first human spaceflight program for the United States.

The tiny Mercury capsules were only designed to carry one passenger into orbit, before landing safely back on Earth’s surface.

Alan Shepard became the first American in space when he enjoyed a 15-minute flight, though he went on to land on the Moon during Apollo 14.

The Mercury missions were not without their teething problems. NASA said: “The first Atlas rocket launched with a Mercury capsule exploded.

“The first Mercury-Redstone launch only went about four inches off the ground.

“From these flights, NASA learned how to fix the rockets and make them safer.”

What was the Gemini space program?

Project Gemini was NASA’s second human spaceflight program, which ran between 1961 and 1966.

The space agency explained: “Before Gemini, NASA had limited experience in space. The Mercury missions had proved astronauts could fly in space.

“But before people could land on the moon, NASA had to learn many things. It had to learn what happened when astronauts spent many days in space.

“Before Gemini, NASA had not done any of them. Gemini proved NASA could do them all.”

Some 16 astronauts flew in the Gemini missions, including Neil Armstrong and Buzz Aldrin, who would later take mankind’s first steps on the Moon.

What was the Apollo space program?

Probably the most famous space program of all time, Apollo successfully carried 12 human being to the surface of the Moon between 1961 and 1972.

The Apollo Program was the brain-child of US President John F Kennedy, who pledged in 1961 to “land a man on the Moon and return him safely to the Earth”.

Kennedy’s dream came true six years after his death when, in 1969, a crew of Neil Armstrong, Buzz Aldrin and Michael Collins flew on the Apollo 11 and touched down on the Moon’s surface for the first time.

When Neil Armstrong stepped out of his landing craft he famously said: ”That’s one small step for (a) man; one giant leap for mankind.”

Jupiter’s Ice Moon Europa Probably Has Upside Down, Underwater Snow : ScienceAlert
Clinical Trial Restored Sight to 20 People With Corneas Made From An Unlikely Source : ScienceAlert
Researchers in South America Discover a New Species of Tiny but Tough Dinosaurs : ScienceAlert
Plants Have Been Keeping a Secret From Us About How Thirsty They Actually Are : ScienceAlert
This Artificial Synapse Can Run a Million Times Faster Than Ones in The Human Brain : ScienceAlert