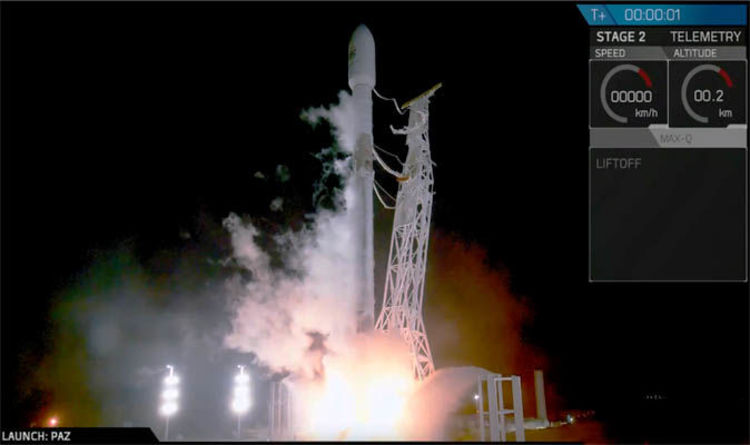 
The imposing Falcon 9 took off to the deafening roar of its Merlin engines shortly after 9.17am EST (2.17pm GMT) today.

Following the ten second countdown at Space Launch Complex 4, Vandenberg Air Force Base, California, the rocket reached top speeds of over 27,600 km/h as it entered space.

Today’s SpaceX mission was divided into two stages, each with their own precious cargo payloads onboard the rocket.

The first stage of the launch delivered a Spanish reconnaissance PAZ satellite into a low-orbital position over Earth.

Tom Praderio, SpaceX firmware engineer, who oversaw the launch from SpaceX headquarters said the deployment was completed without hiccups.

He said: “The primary payload is right now gliding from that second stage. Soon it will unfurl its own solar panels and start communicating with the live teams.

“We’ve had a successful launch from Space Launch Complex 4 , successful stage separation and a good second engine burn and finally just now a good separation from the PAZ satellite.”

After separating from the cargo over Earth, the Falcon fairing plummeted towards the planet below to be caught by a giant claw-like netting onboard a boat.

The fairing missed its target by several metres but SpaceX founder Elon Musk confirmed it looked intact after splashing down in the Pacific Ocean.

Mr Musk said: “Missed by a few hundred meters, but fairing landed intact in water. Should be able catch it with slightly bigger chutes to slow down descent.

He then shared a photo of the fairing in the water saying: “Falcon fairing half as seen from our catcher’s mitt in boat form, Mr Steven. No apparent damage from reentry and splashdown.”

The second stage of the mission was unfortunately not broadcast online and the feed had to cut out as the rocket moved out of SpaceX’s range.

“We don’t have ground station coverage to show you but you can follow us on social media for updates on the demo sats and their mission.”

But the moment the two Starlink demo satellites detach from the Falcon 9 was caught by a camera mounted to the rocket.

Mr Musk since confirmed the satellites, Tintin A and B, have began communicating with ground control.

The South African billionaire said: “Tintin A and B will attempt to beam ‘hello world’ in about 22 hours when they pass near LA.”

The two satellites are the first step towards placing 12,000 such machines in orbit to cover Earth with high-speed internet signals.

The so-called Starlink project was approved this week by the US Federal Communications Commission (FCC) and SpaceX hopes to be operational by 2020.