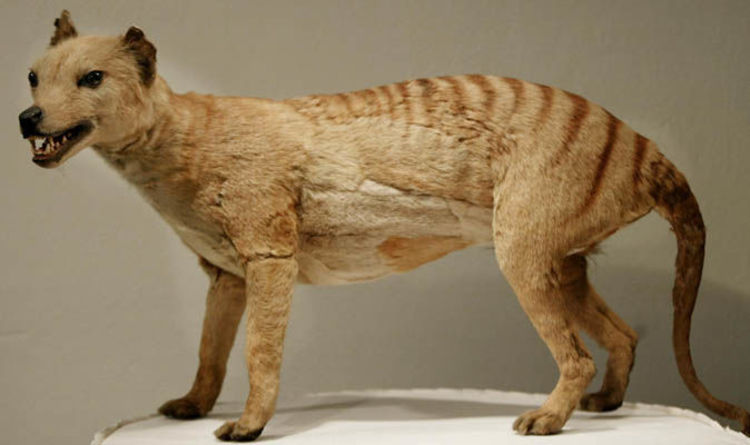 
Stunning 3D scans have been used to reconstruct its development through its early life, using preserved specimens of the species.

Experts believe a link between the tigers and canines could lead to a major breakthrough in the bid to bring the mammal back to life.

Tasmanian tigers have dog-like facial features. These attributes appear once their young, called joeys, have left their mother’s womb.

Bioscientists at the University of Melbourne in Australia used CT scans to look under the skin of 13 juvenile Tasmanian tigers from museums and collections from around the world, varying in age from 1.5 weeks old to 12 weeks old.

They compiled X-ray images to create a virtual recreation of the joeys from all angles and at each stage of their development.

These models enabled the bioscientists to study their skeletons and internal organs so they could reconstruct their growth and development.

This has indicated juveniles quickly developed their canine-like features and after three months and once joey’s leave their mother’s pouch, they took on the characteristics of a puppy.

The findings could help scientists who hope to clone them and bring them back from extinction.

University of Melbourne associate professor Andrew Pask told the Telegraph that due to the detail gathered on the tiger’s growth and development, “bringing back the marsupial could be possible within the next decade”.

Christy Hipsley from Museums Victoria and lead author of the study published in the journal Royal Society Open Science, told the Guardian the tigers initially looked like any other marsupial, with robust forearms so that it could climb into its mother’s pouch.

Ms Hipsely added: “But by the time it left the pouch around 12 weeks to start independent life, it looked more like a dog or wolf, with longer hind limbs than forearms.”

Its resemblance to the dingo, a wild dog native to Australia, is seen as one of the clearest examples of ‘convergent evolution’ in mammals, which is when two unrelated species evolve to look very similar.

The Tasmanian tiger, which ranged throughout Australia and New Guinea before disappearing from the mainland around 3,000 years ago, had sandy yellow-brown fur and black stripes across its mid-drift and hind legs.

The remaining population – isolated on Tasmania – was thought to be hunted to extinction in the early 20th century, with the last known tiger dying at Hobart Zoo in 1936.