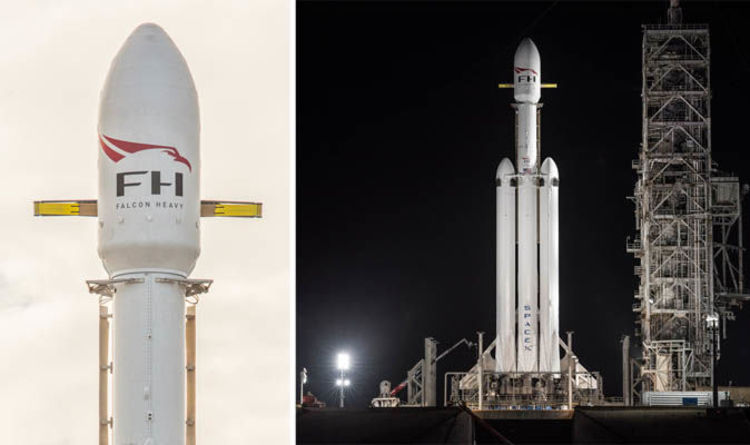 
The unprecedented space mission will see a car blasted into space later today from NASA’s Kennedy Space Center in Florida.

The mission is pencilled in for an estimated launch window around 1.30pm EST (6.30pm GMT) if weather conditions permit.

Ahead of the launch, SpaceX teased: “The first test flight of Falcon Heavy is targeted for Tuesday, February 6th at 1.30pm EST from Launch Complex 39A at Kennedy Space Center in Florida.

“For this test flight, Falcon Heavy’s side cores are flight-proven—both previously supported independent Falcon 9 missions in 2016.”

Today’s grandiose mission marks the Falcon Heavy’s maiden voyage and test flight before the rocket is adapted for human missions to Mars.

Once it successfully lifts off from the Cape Canaveral space centre, the Falcon Heavy will be the single most powerful spacecraft in use since NASA’s Atlas V model.

SpaceX founder Elon Musk announced the details of the mission earlier in 2017, pledging to spice up what would have been an otherwise boring mission.

The Falcon Heavy boasts a total of 27 powerful engines and three boosters adapted from the Falcon 9 rocket model.

Following a successful launch, SpaceX will attempt to bring the Falcon 9 boosters back down to Earth.

He said today: “If all this works and all three pieces of the Falcon Heavy return to base it will be the coolest thing – and a significant step on the road to creating a spacefaring civilisation.

The rocket stands at 70m tall, 12m wide and can carry an impressive 60 tonne load into Low Earth Orbit and up to 17 tonnes on its journey to Mars.

The Heavy was initially scheduled to launch in January but several delays pushed the launch date back to February.

The mission will test the Falcon Heavy’s abilities to deliver humans to the Red Planet.