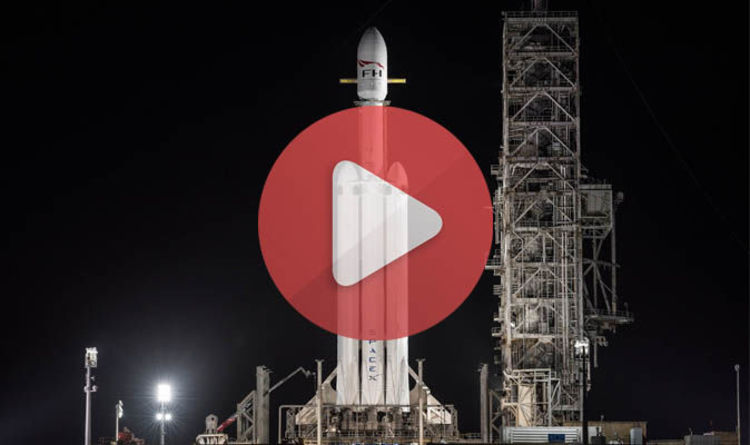 
The rocket manufacturer is keen to send its new spacecraft design on its maiden test flight with a launch window pencilled in for later today.

The SpaceX launch live stream above will kick off just before 2.20pm EST (7.20pm GMT) from the Kennedy Space Center in Florida.

Unfavourable wind condtions forced the company to push the launch back by a whole hour, but the weather is expected to clear.

Thankfully for those who would otherwise miss out on the unprecedented space mission, the online feed will throw audiences right into the centre of the action.

SpaceX’s stream will feature several HD cameras broadcasting from the launchpad, the Falcon Heavy itself and from inside of SpaceX’s mission control.

The company said ahead of the launch: “The first test flight of Falcon Heavy is targeted for Tuesday, February 6th at 1.30pm EST from Launch Complex 39A at Kennedy Space Center in Florida.

The Tesla Roadster will be launched into a “billion year” orbit around the Red Planet, blasting David Bowie’s “Space Oddity” on a loop.

The goal of today’s mission is to prepare the Falcon Heavy for future manned missions to Mars.

If the launch goes according to plan, SpaceX will attempt to bring down the Heavy’s three booster modules down to Earth.

The three boosters have been adapted from the previous generation of reusable rockets pioneered by the Falcon 9, the Falcon 9.

Astrophysicist Brian Cox praised the company on Tuesday for pushing humanity towards becoming a “spacefaring civilisation”.

Mr Aldrin tweeted a picture of himself at the Kennedy Space Center, saying: “It’s a beautiful day for a rocket launch from my favourite launchpad.”