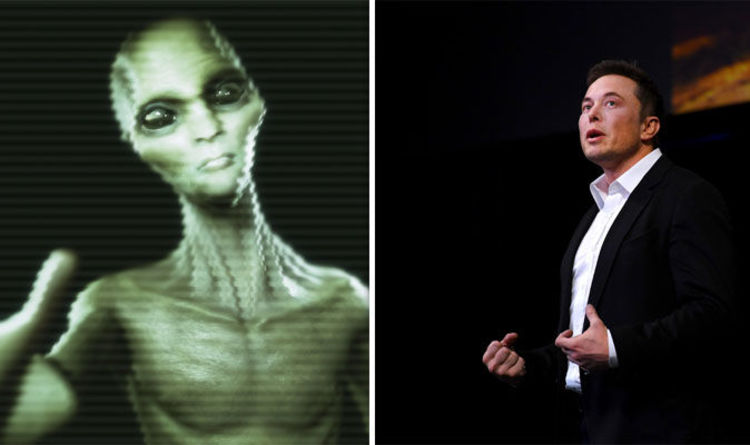 
SpaceX is gearing up to launch to world’s most powerful rocket that has ever been created, from the Kennedy Space Center in Florida today, but billionaire Mr Musk says aliens probably already know his company is launching the rocket.

The South-African born businessman said we are probably not alone in the universe, and if so there is alien life out there, the human race will not be the smartest life.

Speaking at the World Government Summit Mr Musk said: “They’re probably already observing us, that would seem quite likely, and we’re just not smart enough to realise it.”

The theory, which falls under the zoo hypothesis, which claims that aliens are watching us, is an attempt at explaining the Fermi Paradox.

In 1950, physicist Enrico Fermi, the creator of the world’s first nuclear reactor, came up with a paradox which says due to the age and size of the universe there is bound to be a civilisation much more advanced than ours.

But why have aliens not contacted Earth?

Many scientists argue once a civilisation reaches a certain size, it eventually kills itself off as it becomes impossible to sustain, either through war with advanced weapons or natural disaster.

Another possible solution is there simply is no other life out there.

SpaceX is set to launch a rocket which has a thrust power of 2500 tons – the equivalent of 18 Boeing 747 aircraft at full throttle.

Rather than carrying a customers’ payload, the Falcon Heavy will carry a cherry Tesla Roadster to orbit Mars, playing David Bowie’s ‘Space Oddity’ on repeat. The firm said it would “be in deep space for a billion years or so”.

The sleek Tesla Roadster is supposed to be sent into a virtually indefinite solar orbit, on a path taking it as far from Earth as Mars. SpaceX has planted a space-suited mannequin in the driver’s seat of the convertible.

Liftoff of the 23-story-tall Falcon Heavy was slated for as early as 1.30 p.m. EST (6.30pm GMT) at the Kennedy Space Center in Cape Canaveral in what would be a key turning point for Silicon Valley billionaire entrepreneur Elon Musk’s privately owned Space Exploration Technologies.

Propelled by 27 rocket engines, the Falcon Heavy packs more than 5 million pounds of thrust at launch, roughly three times the force of the Falcon 9 booster that until now has been the workhorse of the SpaceX fleet.

The new heavy-lift rocket is essentially constructed from three Falcon 9s harnessed together side-by-side, and Musk has said that one of the most critical points of the flight will come as the two side boosters separate from the central rocket in the first few minutes after blastoff.

If the demonstration flight succeeds, Falcon Heavy will rank as the world’s most powerful existing rocket, with more lift capacity than any U.S. space vehicle since the era of NASA’s Saturn 5 rockets that took astronauts to the moon some 45 years ago.

Fittingly perhaps, the SpaceX rocket will depart from the same launch pad used for the Saturn 5 until its final mission in 1973.

Falcon Heavy is designed to place up to 70 tons into standard low-Earth orbit at a cost of $90 million per launch. That is twice the lift capacity of the biggest existing rocket in America’s space fleet – the Delta 4 Heavy of rival United Launch Alliance (ULA), a partnership of Lockheed Martin Corp and Boeing Co – for about a fourth the cost.