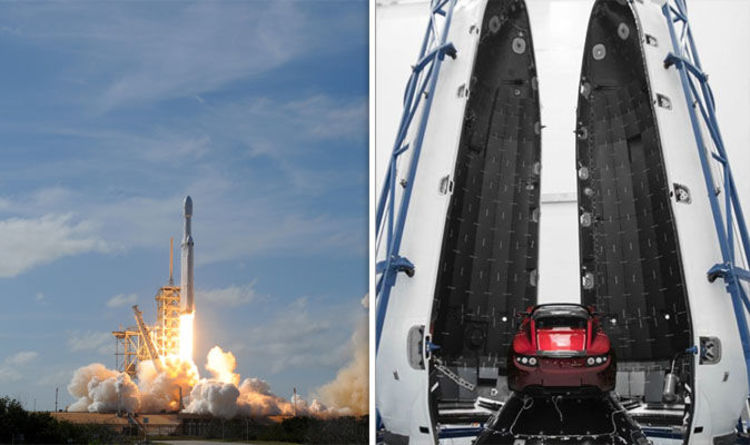 
Entrepreneur Mr Musk and SpaceX made history yesterday after the successful launch of the Falcon Heavy – the most powerful and heaviest rocket ever built.

The rocket was carrying was a cherry-coloured Tesla Roadster with a dummy driver listening to Space Oddity.

However, scientists believe that Mr Musk’s claims are slightly ambitious.

Experts believe the organics of the car – the plastics and carbon fibre – will be torn apart as if a knife is stabbing them thanks to the intense radiation from the sun.

Earth is protected from most of the radiation in space by the atmosphere. But the Tesla, in the vacuum of space, is not afforded such privileges.

The energy in the radiation from the Sun will cause bonds to snap, and scientists do not believe the car will last a year.

William Carroll, a chemist at Indiana University and expert in plastics and organic molecules, told Live Science: “All of the organics will be subjected to degradation by the various kinds of radiation that you will run into there.

“Plastics and carbon fibres are made up largely of carbon-carbon bonds and carbon-hydrogen bonds.

“When you cut something with a knife, in the end, you’re cutting some chemical bonds.

“Those organics, in that environment, I wouldn’t give them a year.”

The Falcon Heavy became the most powerful commercial rocket in the world following its successful launch from the Kennedy Space Centre in Florida.

Thousands of spectators gathered on the beaches of Florida to watch the Falcon Heavy rocket take off from launch pad 39A – which launched Apollo 10 in 1969.